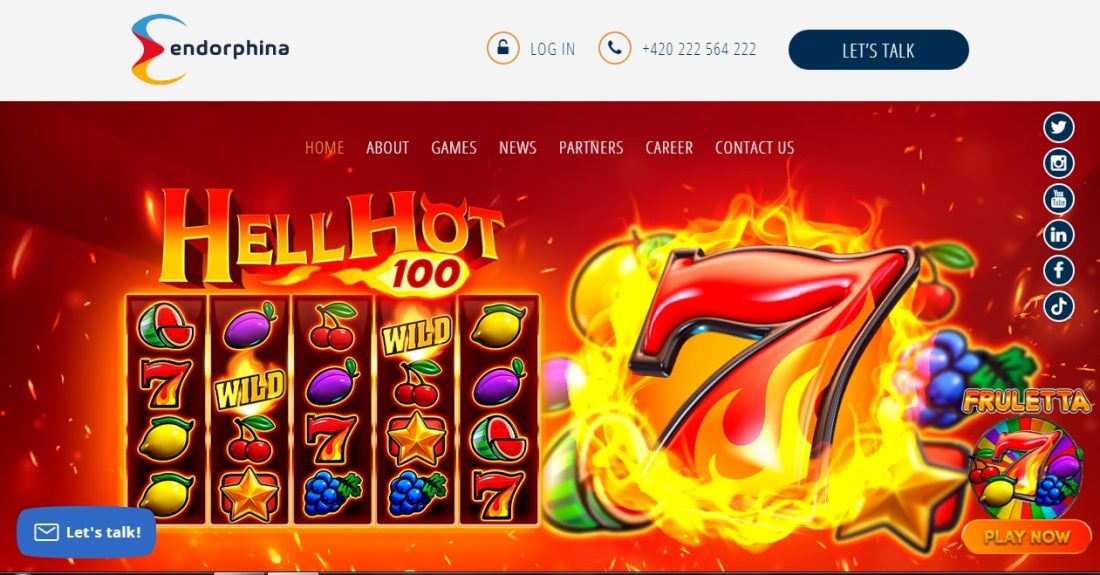 Endorphina Limited is a Czech company headquartered in the capital of the Czech Republic, Prague. The presented gaming software developer & provider is operating in the online gambling industry since 2012.

It is registered under EU law in the territorial jurisdiction of Malta and is a holder of the Malta Gaming Authority (MGA) license (Gaming services, Type1, B2B) from 2018 and of and ONJN. All games are certified and thoroughly tested for quality and fairness by an independent lab GLI in 2019.

The company works exclusively with video slots available online. Its game selection currently represents 95+ machines and annually is expanding its collection with 12 new gaming machines. Endorphina casino games are based on Flash and HTML5.

Since its inception, the company strategically has focused on expanding the client base by designing slots that combine the latest innovative technologies and the best gaming experience.

To implement the first part of this strategic plan, the company engaged a professional team of designers, developers, marketers, and other professionals. To create the best gaming experience, the developer takes into account the following aspects:

All developments are based on the creative work of company mathematicians who calculate and create reliable mathematical modules and algorithms. This was proved by tests carried out in 2019 by GLI specialists. This means that a stable and reliable game is fully guaranteed for players of gambling sites.

Over the years, Endorphina has gained recognition not only by becoming a favourite of many players and popular among online gambling casino operators as an online slots manufacturer and provider but also having won several significant awards in the gambling industry.

In September 2017, Endorphina’s games won the first honorary title at the Entertainment Arena Expo in Bucharest, Romania, being awarded the “Product of the Year” title.

In 2015, the authoritative edition Slots Guide named the provider “The Best Slots Developer of 2015”. The same publication singled out the novelty of The Ninja software, awarding it second rung in the ranking of the best online slots. This slot machine and Satoshi’s Secret got nominations for Readers’ Choice 2015, according to Slots Guide.

Among other achievements of the company, it is worth noting its entry into the cryptocurrency gambling market. In collaboration with casino platform developer SoftSwiss, Endorphina made it possible for players to create an account in bitcoins and VSO coins. In this regard, it dedicated the aforementioned Satoshi’s Secret to the popular topic of crypto and blockchains.

The company is very proud of the winnings that players of various casinos receive in the slots of its slots. Even though there are no slots with progressive jackpots in the manufacturers’ portfolio yet, other video slots gladden players with large payouts with an enviable frequency.

Endorphina actively cooperates with other participants in the international gambling market. Among them are trusted game providers and more than 350 casino operators who are willing to add games of this manufacturer to their portfolios and aggregated platforms. The most loyal partners of the manufacturer are:

Besides the online casinos-partners mentioned above, it is also worth noting several large and popular online casinos that present video slots from this manufacturer on their sites: Playamo, ZenCasino, 22Bet, Champion, Bob, and Casoo, and a range of others.

A choice of bonuses with different bonus features are available in games Kamchatka, 7UP!, Cuckoo, Twerk, Satoshi’s Secret, Pachamama, and The Vampires. Besides, the provider has already launched on the gambling market his slot machines with the purchase of a bonus (Book of Santa). 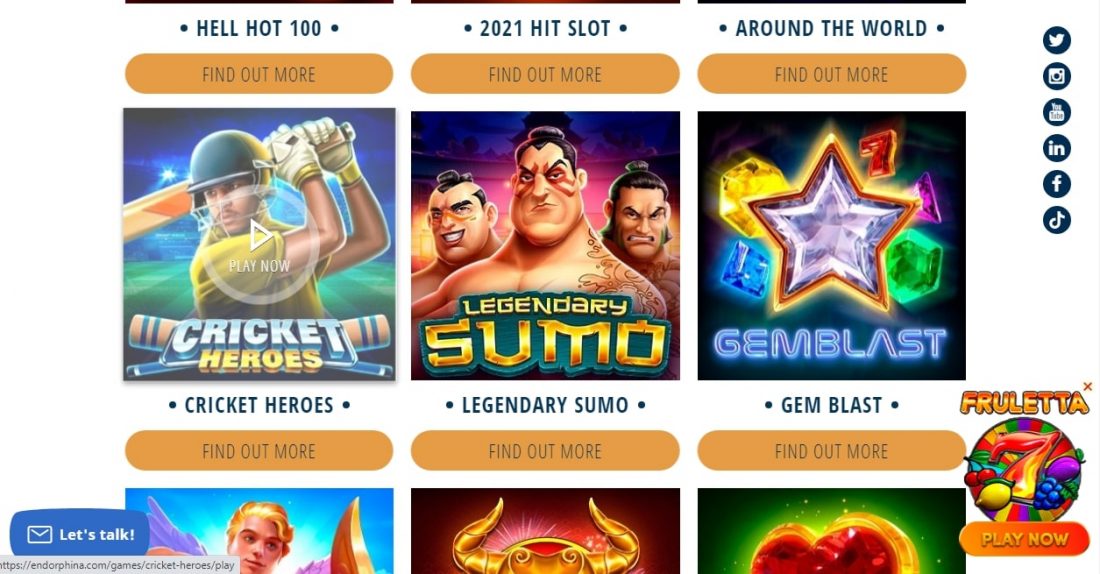 The average RTP (Return to Player) in online Endorphina slots is 96%. That is, out of 100 coins wagered in games, about 96 are refunded to players after a programmed number of wagering rounds. Video slots are available in several language versions, including Russian. The gaming portfolio includes 11 game options if to take payline numbers as a criterion.

The simplest machines, some of which resemble classic slot machines like Lucky Dice, Lucky Streak, Ultra Fresh, have five paylines. The next group has 9-10 paylines on the reels, such as Undine’s Deep, Temple Cats, Chimney Sweep, 2027 ISS, etc.

There are even more games from Endorphina which permit 20, 21, or 25 winning combinations. There are some of them: Stone Ace, Geisha, Taboo, 2016 Gladiators. Among the games with 40 payline combinations are Durga and Lucky Dice. Safari and Blast Boom Bang have 50 winning paylines.

It is difficult to find another provider that cares so much about the storyline content of each slot. A special approach to design, interesting themes, and their disclosure from the point of view of the execution of graphic elements, and a perfectly matched musical track make each product memorable. The casino games created by the company’s professionals cover a variety of topics. We group them by general themes.

They are called classic, not because on the reels – “Cherry” and “BAR” as the predecessors of modern slot machines, but because their themes are classics of life. Among them is 4 of a King, designed in a “card” style.

Gems and Stones are reel gems that have become classics and have found their way into the gaming portfolios of many providers. In this category, there are also topics about luxury life, wealth like luxury life, In Jazz, Jetsetter, Football Superstar. 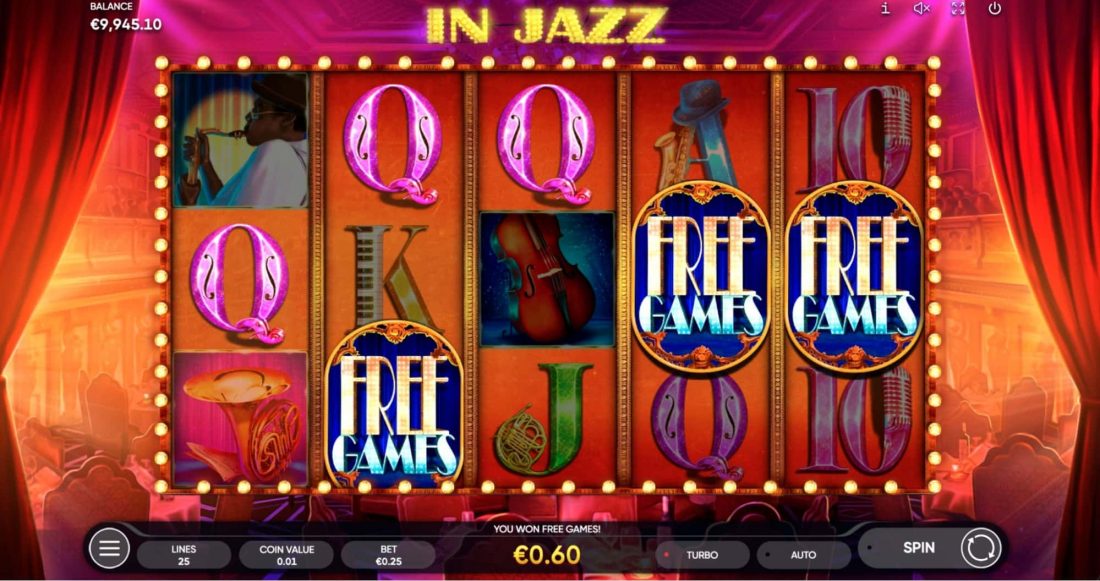 Stories of fearless heroes and amazing adventures in distant lands come to life on the reels. Here are the mighty Vikings (The Vikings), and the clever ninja (The Ninja), and desperate treasure hunters (Mystery of Eldorado), and the mythical characters of the sea deep blue (Undine’s Deep).

The player can stay either shoulder to shoulder with superheroes (Blast Boom Bang) or nomadic warriors (Mongol Treasures) or find themselves on a safari (Safari) or in an ancient temple (Pachamama). We would especially like to note an unusual slot machine about a distant land – the Kamchatka Peninsula, which will please Russian-speaking users (Kamchatka). 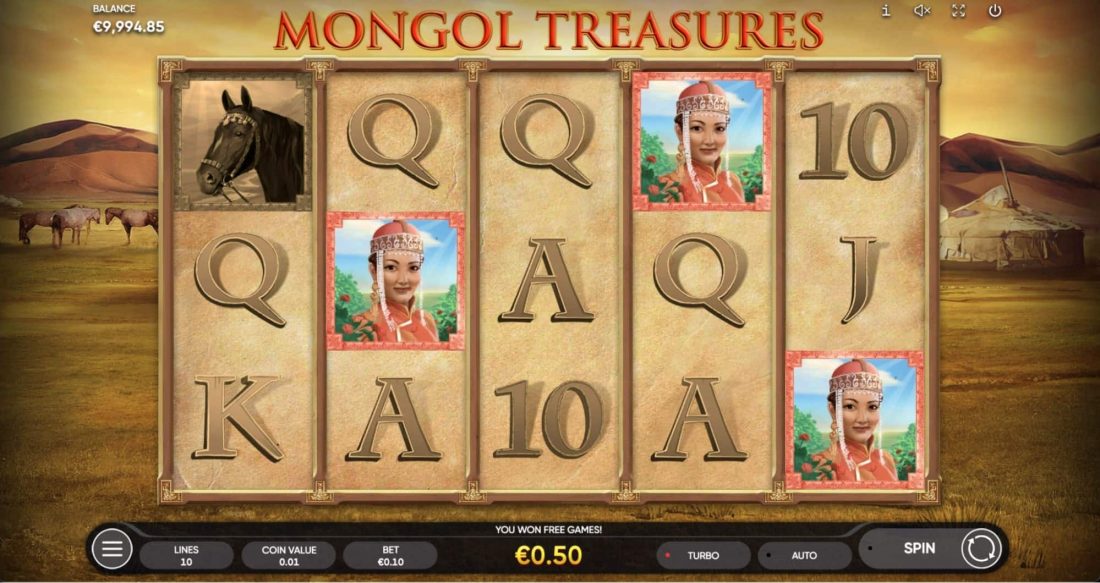 The theme of the peoples of the world and their cultures is fruitful. There are hundreds of machines in Greece, Scandinavia, Egypt events, etc. Endorphina also regularly adds these themes to their collection. Historical Almighty Sparta and Urartu, mysterious Dia De Los Muertos and Tribe, and incredibly beautiful Chunjie and Cuckoo have become loved by many players.

A special place in this category is occupied by slots based on oriental motives: The Emirate, Durga, Geisha, Sushi, Origami. 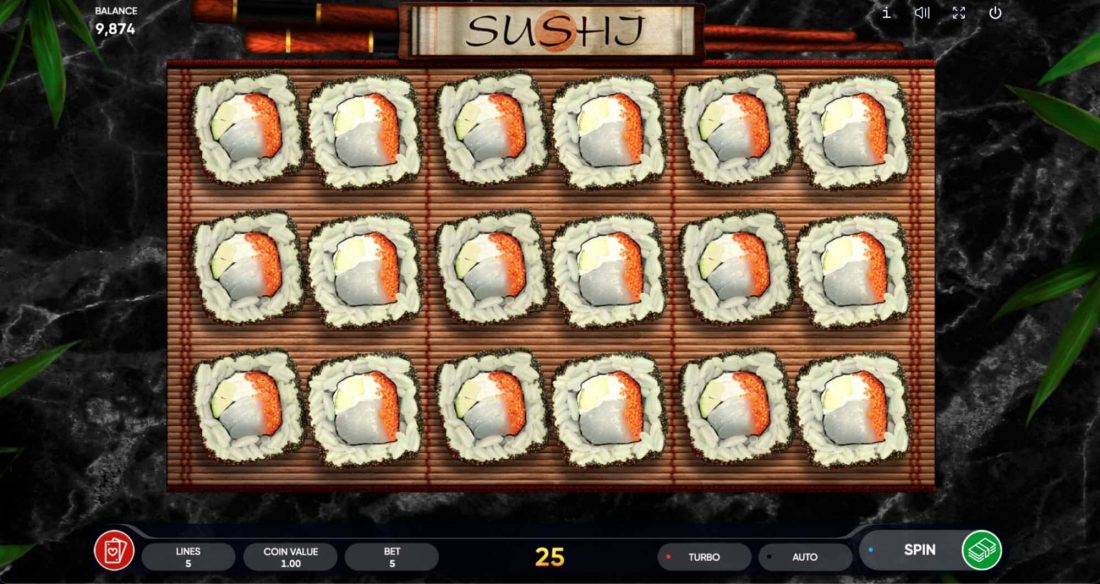 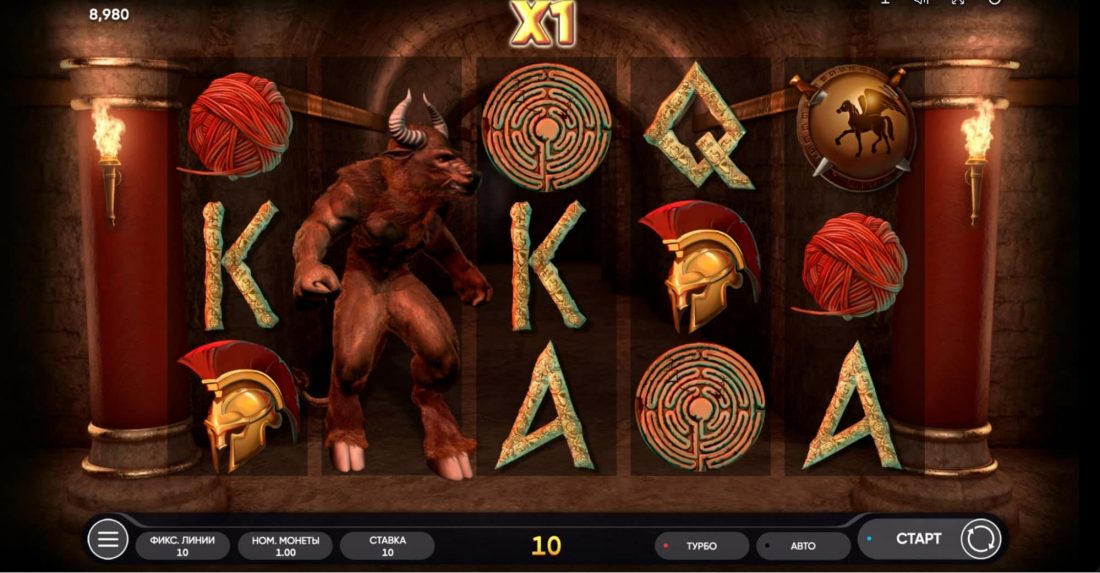 This category includes slots that are difficult to find on other gaming platforms. For example, Diamond Vapor is about the vaping smoking trend, Twerk is about the modern hot dance of the same name. Taboo is a sensual slot about the forbidden or Satoshi’s Secret about the world of hackers, bitcoins, and blockchain. 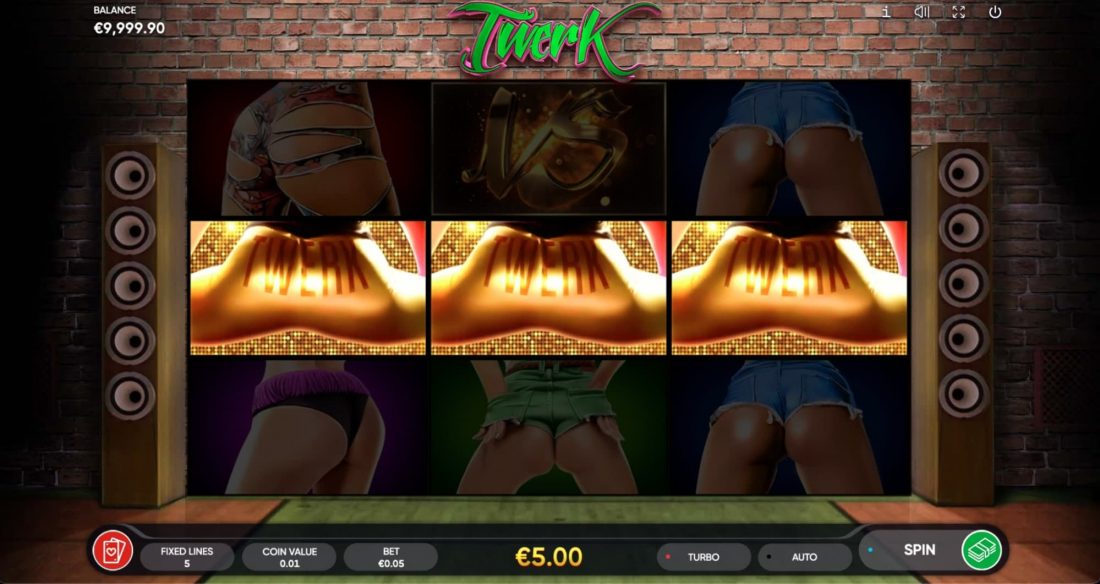 The games of this provider often contain cinematics and 3D graphics, which create a special atmosphere and gaming experience for users. 3D games include The Ninja, Fairy Tale, Tribe, Chunjie, and Minotaurus.

The gaming functionality in the software is diverse. In the company’s portfolio, the player can find machines with all the current most popular gaming options like Multipliers, Free spins, Wilds, Scatters, Gamble features, Bonus games, etc.

For those looking to take advantage of every spin, we advise you to try hands-on free games like Mystery of Eldorado, Voodoo Dice, Vikings, Geisha, Football, Ice Pirates, The Vampires, and more.

They are integrated into many slots and can increase the wagered amount on a spin from X2 to over X2000. You can try multipliers in Ancient Troy Dice, Taboo, Durga, and Diamond Vapor.

The Gamble function to instantly double, quadruple, or increase even more times the winning per spin adds excitement to games and is available in Lucky Lands, Football Superstar, Tribe, Slotomoji, Chunjie, Jetsetter, The Ninja, Origami, and others.

Summing up our review, we will focus primarily on the fact that Endorphina Limited daily proves its reliability as an Endorphina casino partner in mutual transactions and cares about increasing joint revenues from beneficial business cooperation.

The tool for this is the company’s relentless concern for the novelty, efficiency, uniqueness, and relevance of its products. The proof of the success of slots in the gambling market is the presence of its slot machines in the most famous and promising studios of the gambling industry and the availability of its free games in social reds.