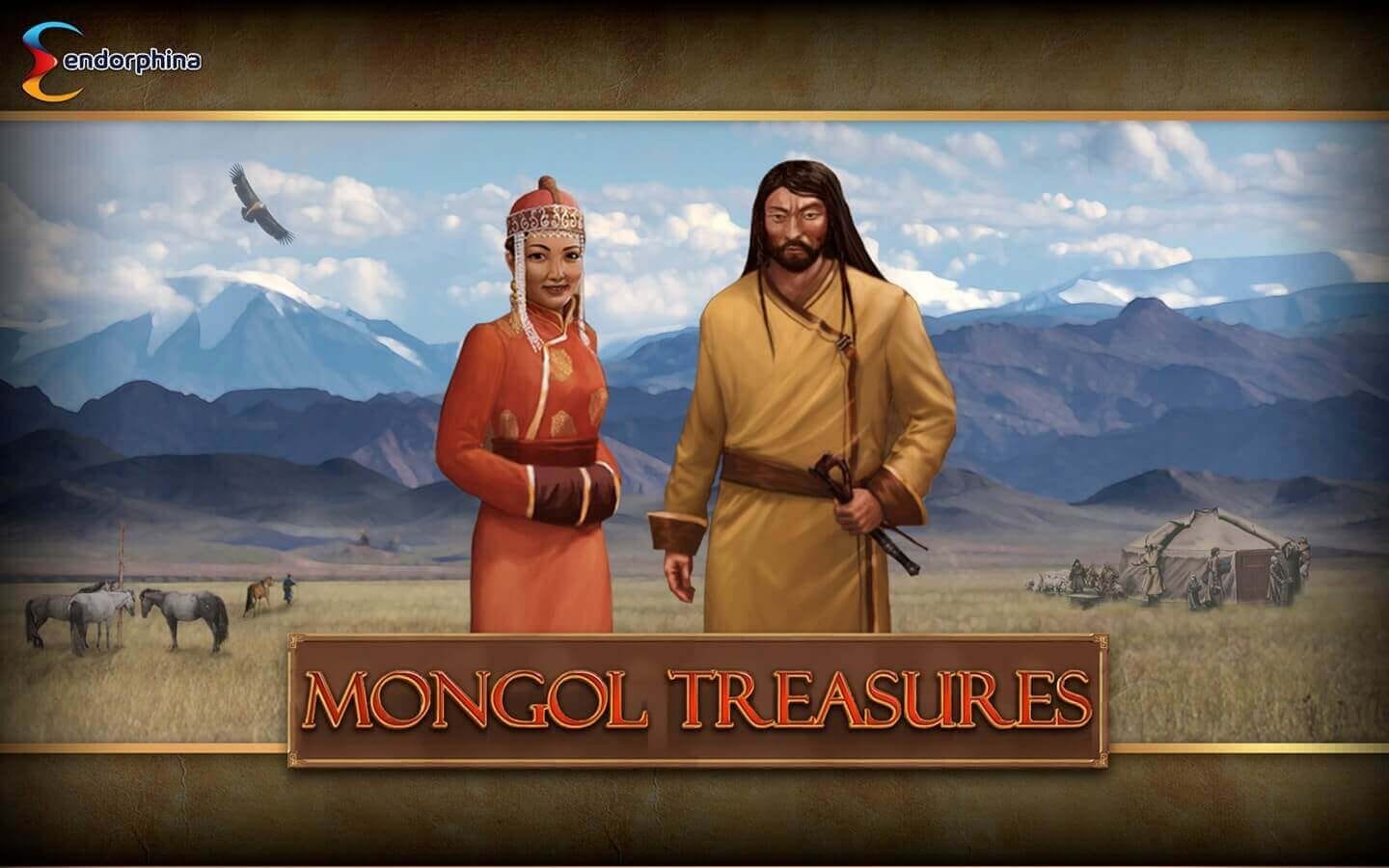 Visit Slot Play demo
Content
Pros
Originality in the choice of the topic - the Mongol invasion
Free spins and the opportunity to play a win
Multilingual interface allows users from most countries to fully understand the rules of the game
Mobile friendly
A thrifty user can even bet 1 cent or a penny, but the high roller will also be delighted
Cons
The topic is not disclosed well enough
There are only ten winning lines 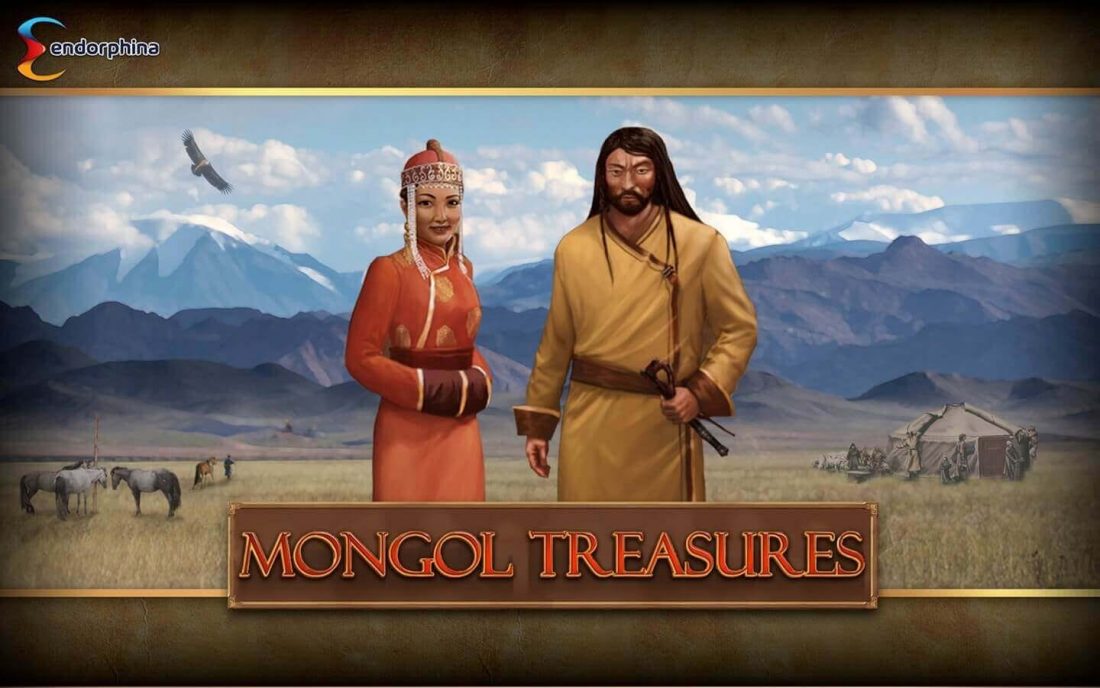 Most of the great empires of the ancient world, even having lost their former greatness, continue in the form of relatively large and significant modern states. Italy, Turkey, Mexico, Great Britain, France, Spain, Russia, China, Japan, even Iran – these are not the last states; some of them had more solid status in the past, but it cannot be said that they are not taken seriously today. At the same time, a person who is well acquainted with geography, but does not know history, will probably be surprised – how was MONGOLIA at one time the largest empire in the world? Yes, it was, while controlling most of Asia and some territories in Europe.

Relatively little information remains about that period – in particular, historians do not know what the great Mongol rulers looked like, and how a small steppe tribe of nomads managed to conquer such vast territories. Undoubtedly something else: the fierce horsemen agreed not to offend their subordinates if they paid a generous tribute; given the size of the empire, one can imagine what countless treasures its rulers possessed. Endorphina, presenting its brainchild named Mongol Treasure Slot to the users’ judgment, invites them to dream about them.

For a beginner, the mysterious name and non-trivial theme are tempting in themselves, but an experienced player knows that developers often simply change the symbols on the playing field, copying the game mechanics of older video slots. If the “original” had flaws, they go into a “new” entertainment because neither the fresh release date nor the “cool” title says anything. Not wanting to waste your bankroll and free time, you will either have to not change proven and familiar games at all or trust the opinion of other players.

By the way, the second option works – users who don’t like something will leave critical comments on the Internet about it, just to speak up. Thanks to this, we can find out in advance whether a particular entertainment is worth attending to, or we can safely pass it by without losing anything. But looking for real opinions on thematic forums is a long and tedious task. We have already completed it for you, and most often we have met such positive reviews about Mongol Treasure Slot:

Let’s highlight two significant drawbacks of the game, which are often mentioned by users on the forums and caught our eye. First of all, the topic is not disclosed well enough – card symbols are actively used in the most primitive drawing, and the 2015 release of entertainment does not justify this problem. In addition, there are only ten winning lines – this is not critically small for a playing field of three rows and five reels. However, competitors manage to cram up to twenty-five variants of a winning combination into the same area.

If you start criticizing the developers for the poor study of the topic of the Mongol Empire, the team probably counters the fact that even historians know very little about the Mongols of those times. The empire rested on the brute force of the conquerors and not on culture – the Mongols themselves did not come up with anything outstanding, did not get carried away with writing books or painting, therefore, even their portraits were not left. All information about them is formed from sources written by subordinate peoples, more culturally developed, and therefore too polite to give a normal rebuff. However, this is all philosophy, but in reality, we have a slot with horses of three colours, a khan (probably Genghis Khan), and some nameless oriental beauty. All are other common, card-based symbols. 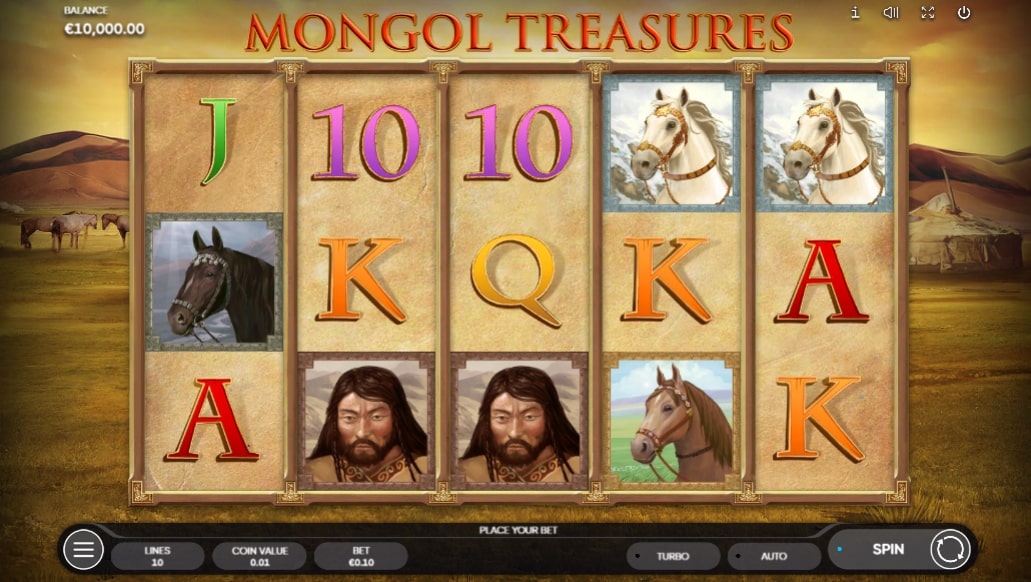 The story is similar to the soundtrack. Usually, Endorphina slots receive from us a flattering assessment for the musical accompaniment – the guys select constantly playing music in the theme, which deeper reveals the culture of a certain country. However, it is unrealistic to identify the authenticity of Mongolian music, and even the 13th century – most likely, it does not correspond to the original. Therefore, wishing to highlight something positive, let us pay attention to another interesting point – instead of the standard sound of drum rotation, the characteristic clatter of horse hooves is used.

The return percentage is perhaps the main characteristic of any slot that interests a gambler in the first place. Initially, it is clear that the casino is not a volunteer organization, it works for a percentage of the players’ costs, and that is why it is so difficult to get a profit. To become richer, thanks to the slot, you first need to win back your money, then the commission, and only then will there be profit. Consequently, the size of the commission is of decisive importance, and the percentage of return is precisely the bankroll minus the commission.

Mongol Treasure Slot has RTP set at 96%. For a slot from a good manufacturer, claiming to be a leader in the industry, this is approximately the average figure – that is, the payout rate can be higher but not significant. Against the background of start-up companies and half-scammers trying to rip off a gullible player, this is still a solid return, leaving real chances of gaining profit.

2015 is the era of rather primitive slots, of the same type in terms of game mechanics and not suggesting flexibility. Therefore, one should not expect any special rules from Mongol Treasure Slot all the local rules for obtaining a win are familiar to an experienced gambler from the cradle. Identical symbols must be collected in combinations (horizontally, diagonally, or in the form of a pattern) of three or more units, although for rare expensive symbols the winnings are available even from two units. The size of the win is directly influenced by both the cost of the symbol and the number of units involved. The wild symbol (in the form of an oriental lady) tends to replace other signs if this helps the player to get (or increase) the winnings. 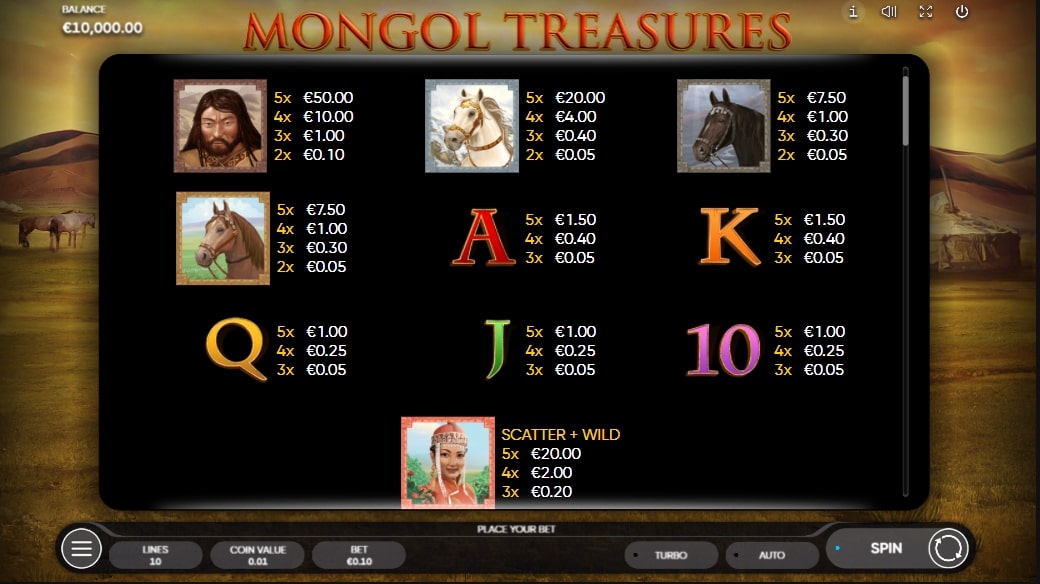 Each user has the right to play his winnings, additionally risking it in the hope of winning. The Mongols could calmly graze their herds on the endless expanses of their native steppes, but they chased great opportunities, risking their heads – are you ready for this? If yes, then the scheme is quite simple – you will be given a card, and with it, you will have to beat the card that the dealer will lay out. If you succeed, your winnings will double, and you will get a chance to build on your success (no more than five times in a row). Any loss means that the money is lost, and the risk game is over. If you have not yet managed to lose funds, you can withdraw them at any time – this is your right.

To get a package of ten free spins, you need to ensure that three scatters in the form of an oriental beauty appear on the playing field at the same time (she also performs the functions of a wild symbol). The location of the scatters on the playing field does not matter – if there are three in any combination, you will receive your free spins. While wagering free spins lasts, three scatters on one screen can appear again. This is good news for the player because the bonus is “rechargeable.”

Mongol Treasure Slot leaves a double impression. On the one hand, the developer chose an interesting topic, implemented it to the best of his ability in 2015, and offered a non-trivial result that could captivate a person interested in history. On the other hand, today’s entertainment looks somewhat trite due to a large number of card symbols and primitive game mechanics. Therefore, the general verdict is as follows: in 2015, Mongol Treasure Slot deserved, perhaps, a solid four, but now so much time has passed that it would be nice to restart it.

faq
What is the RTP of the Mongol Treasure Slot?

The administrations of most online casinos that feature Mongol Treasure Slot offer a 96% return on this entertainment. A person accustomed to good and honest video slots will hardly be impressed by such an indicator, but it should not disappoint either. As for competitors with a lower rank than against their background, this slot looks like a real gold mine, leaving the chances for ultimate financial success.

What is the biggest win available on Mongol Treasure Slot?

The maximum jackpot in Mongol Treasure Slot is your stake multiplied by 5,000 times. It would be more correct to call such an indicator average: the most “profitable” competitors give much more, but there are also such entertainments where one can only dream of something like that. Whatever one may say, 5000x is in itself a great rarity, almost unheard of for an ordinary user, but it’s nice that there is a chance. Combined with a high maximum wager, this is a potentially powerful win.

How volatile is Mongol Treasure Slot?

Mongol Treasure Slot has a high variance – you can’t expect to instantly beat off the average 96% here. It is more correct to expect that the player will invest a substantial amount of money, make a huge number of spins, and only then most of this amount will drop into his account in one win. Small wins happen much more often, but they usually cannot cover even the winning bet, let alone the neighbouring losing bets. Thus, a wise tactic is to save your bankroll, which you shouldn’t lose in a couple of spins.

Is there a free spins bonus in Mongol Treasure Slot?

Ten free spins are provided in Mongol Treasure Slot with three scatters in the shape of a girl with a characteristic Asian appearance. In the course of the free spins, a similar reward can be received again.