See all
No code required.

50% up to €200, 3rd Deposit Bonus Winhalla
No Deposit Bonus
Get bonus
No code required.
50% up to €200, 3rd Deposit Bonus Winhalla
Get bonus
Content
Pros
The administration has managed to attract the largest software developers from around the world as partners
All available entertainment can be launched on mobile devices
Among other games, there are also interactive broadcasts with live dealers
The loyalty program is really interesting and exciting
Cons
A support service that doesn't work around the clock
The presence of commissions in some areas of withdrawal
Players from different countries see the list of entertainment differently 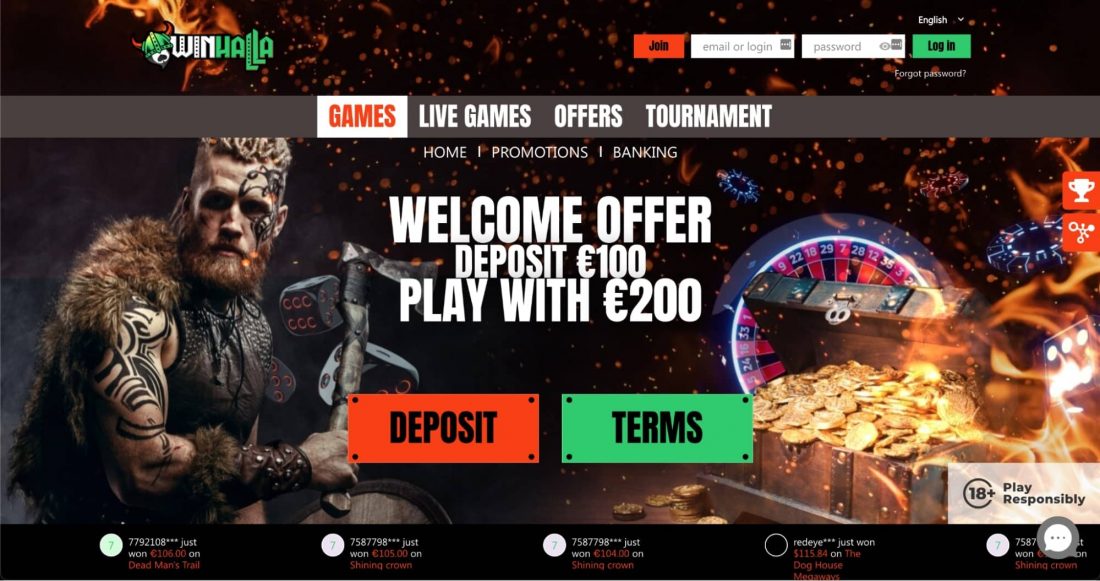 In the past couple of years, the number of online casinos has grown exponentially, and the issue of competition between them has become especially acute. With the appearance in our life of such a phenomenon as lockdowns, numerous investors rushed into the industry, wanting to grab a piece of the pie that fell out of nowhere. However, in pursuit of the attention of the general public, it is imperative to offer something original and memorable. Some administrations decided to focus on the national cultures of individual countries – in particular, Winhalla Casino exploits the theme of the Vikings.

Against the backdrop of a rapidly growing number of new establishments, players simply don’t understand who they can trust and who doesn’t offer anything but an outright scam. Winhalla Casino was founded only in 2021 – that is, it cannot boast of any reputation at all. However, we do not suggest that readers form their own opinion about the institution without prior preparation, at their peril and risk. Instead, we meticulously collected feedback from real users to highlight the strengths and weaknesses of the casino collectively. Talking about the advantages of the site, one cannot ignore the following:

However, as is often the case with small young casinos, there are quite a few flaws, and some of them will slow down the development of the brand. Example number one is a support service that doesn’t work around the clock; your time zone may not coincide with UTC so much that operators are absent from the workplace during the most popular times. Another dubious feature is the presence of commissions in some areas of withdrawal, and they can reach as much as 40 euros, and this is nothing more than killing your reputation! Finally, the third problem lies in the fact that players from different countries see the list of entertainment differently – in some jurisdictions, the creations of reputable providers are not available.

Most new establishments aim to attract audiences with a generous welcome bonus. The amounts are sometimes announced unrealistically huge, but at the same time, the wagering conditions are such that the office does not go into negative territory. Winhalla Casino chose a different path, a more risky one: it put up more modest sizes of the welcome package in the hope that someone will read the terms and see that they are somehow realistic. 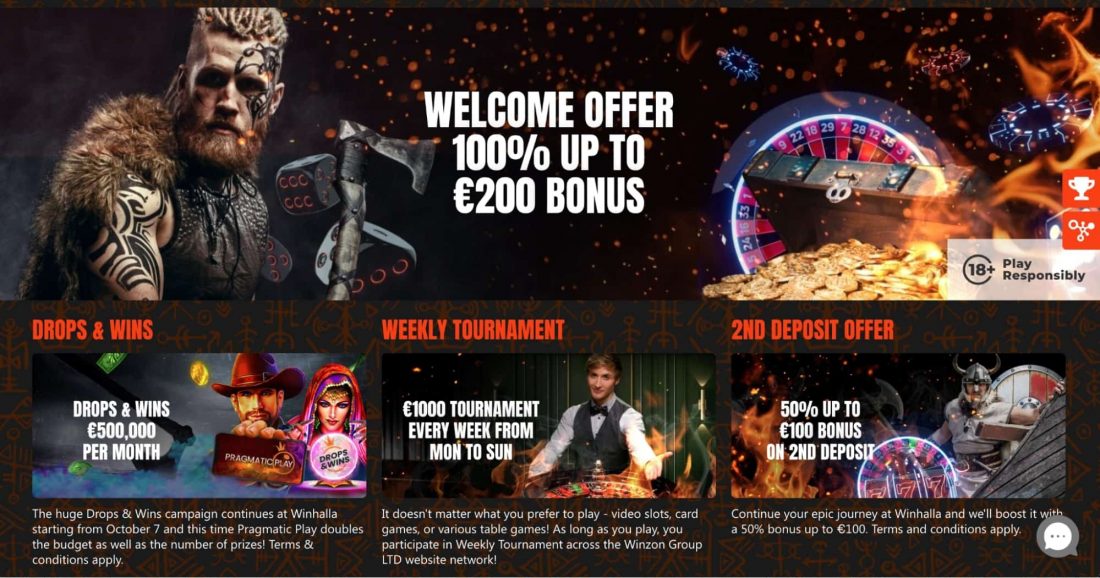 To participate, you must deposit at least $ 20 each time (or the equivalent in your currency). Wager 30x is presented by the administration as very profitable, but here we have a catch: we need to wager not only the bonus but also the deposit itself. From this point of view, it turns out that the bonus for the second and third deposits is cleared at the shockingly high wager of the 90s, so we will regard such an offer as an opportunity to play for extra money, but not win!

To retain customers, establishments come up with loyalty programs with rather vague conditions – sometimes, the player does not understand why he needs to rise to higher levels. The Winhalla Casino administration has done everything possible to make the rules of participation look extremely simple and clearly show the gambler what he is striving for.

The principle is this: you bet more – you get more loyalty points. No lottery drums with prizes upon reaching a new level and no one-time gifts – by increasing their level, the player simply gets more favorable conditions for exchanging loyalty points back for money. In other words, this is a cashback, the amount of which is predictable and known in advance. If at the bronze level for 50 loyalty points, they will give 1 euro, then at the silver level – 1.5, at the gold level – 2, and at the diamond level – even 3! Accordingly, the problem disappears, in which the player at the upper levels loses the motivation to play because the next level looks unattainable, and the current one-time reward has already been received. 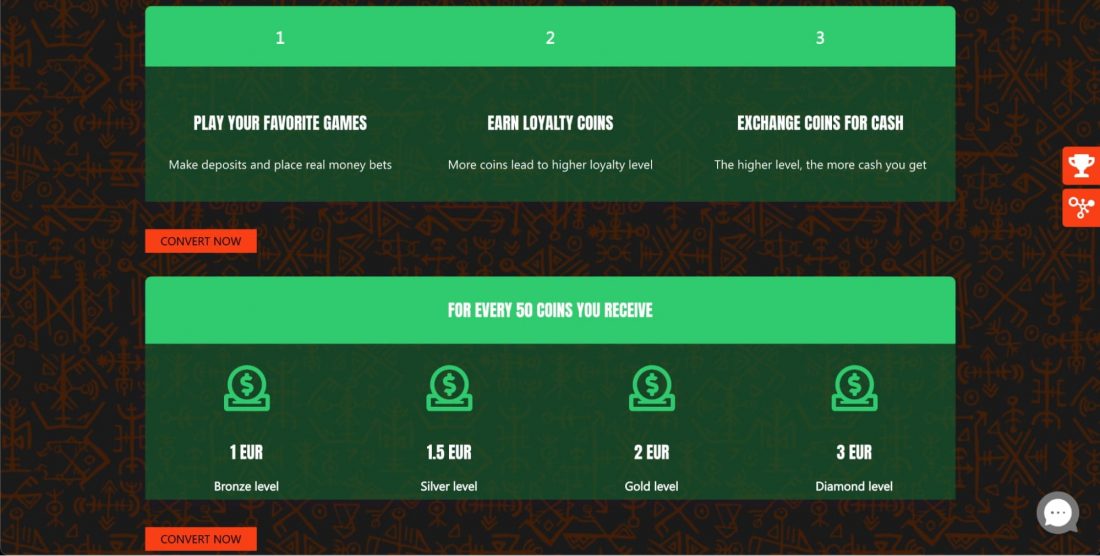 When it comes to the respectability of an establishment, many clients look first of all at the country of licensing. Incidentally, the right decision: some kind of “license” Kahnawake is a phony letter issued by a non-governmental organization, while conditional Malta makes the wards comply with the strict laws of the European Union. Winhalla Casino has worked hard to obtain a Maltese license, one of the most reliable in the world, and this is unambiguous respect.

Among other things, the site also ensures the fairness of the game process – the winner of each game is determined by a random number generator. This means that casino representatives cannot interfere in any way, even if the machine drives them at a loss. Various fraudsters also cannot become participants in the gameplay – they will not be able to hack the player’s account, whose security is guarded by SSL encryption. 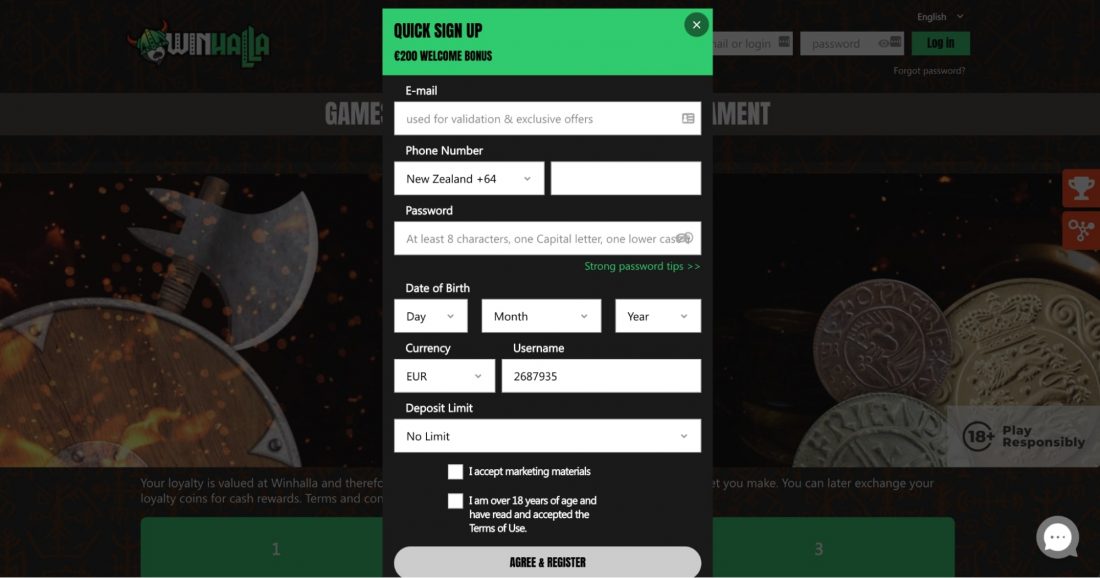 Winhalla Casino’s registration window looks like the administration doesn’t insist on getting to know each other too closely. Yes, they ask for e-mail, phone number, and exact date of birth, but no one asks for either the real name or the address of residence. Did they believe that this could be so? Do not be fooled, the Maltese license a priori does not allow you to ignore the principle of KYC – the office is obliged to know the player “by sight,” and the question of your political significance confirms this once again. Agree, it’s stupid to ask such questions without checking if the client answered the truth!

Therefore, when trying to withdraw funds from the user’s account, a surprise awaits – to do this without filling out a much more detailed questionnaire simply will not work. They will already ask for both the name and the address. We advise you not to lie because the office reserves the right to verify this data by requesting verification. She usually does this at the most inopportune moment – when there is a decent amount on the account that you want to withdraw. If the data in the questionnaire and documents do not match, these funds may get stuck in the system forever!

There are practically no establishments that today would offer customers full-fledged software for Android or iOS. Winhalla Casino, launched in 2021, does not do this either – at a time when phone browsers began to support HTML5. This means that all the functions of the site, including the launch of animated graphics, are available even in the browser, and separate software becomes meaningless.

If you plan to alternately use a PC and a phone to access the site, it is enough to register once – through any version of the site. On the smartphone, the casino will automatically load in a light version of the interface. When logging in from a device of a different type, just enter your usual username and password.

Winhalla Casino offers users a total of slightly more than a dozen directions for making deposit and withdrawal transactions. Cryptocurrencies are not supported, but fiat money is accepted from bank cards (including Trustly, bank transfer, and SEPA) and e-wallets (Skrill, Neteller, ecoPayz).

The minimum amount of replenishment in all directions is $ 20, the maximum varies greatly depending on the method and can reach a shocking $ 100 thousand. Money is credited to the account instantly, no commission is charged. With the conclusions, everything is more complicated: international transfers entail a solid commission, the payment can take several days, and the minimum threshold has been raised to $ 25. 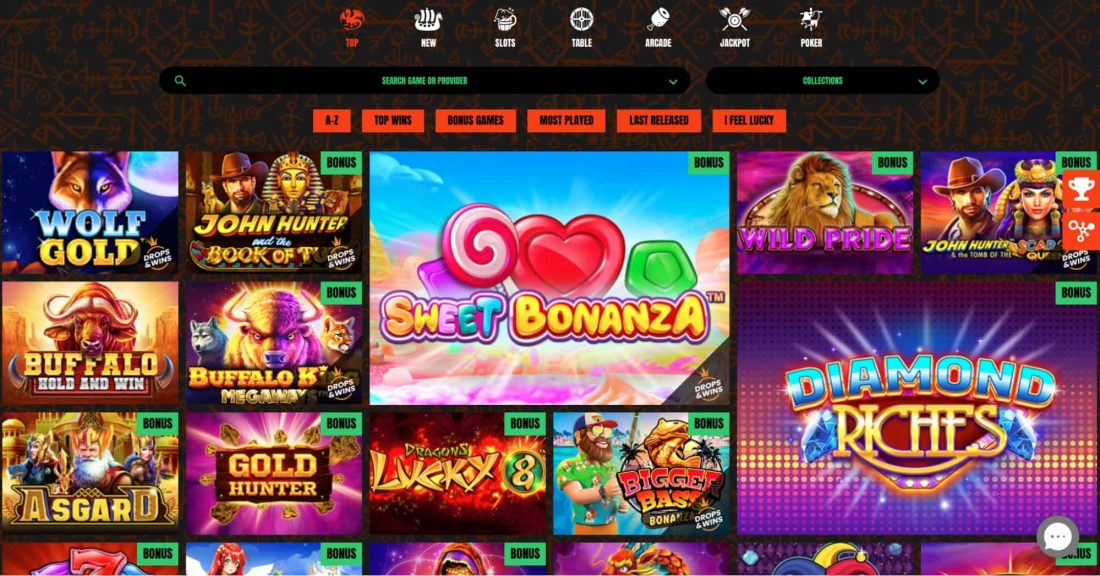 Despite the still short history of existence, Winhalla Casino already cooperates with more than three dozen different providers. Few? The administration will answer that they chose only the best providers. And they will be right because the list includes Microgaming, Evolution Gaming, Red Tiger, and many other studios for which it is worth registering at an online casino.

The main segment of the entertainment assortment is made up of slot machines, some of which are built on the principle of games with a progressive jackpot. Table games help to add variety, which any gambler will immediately call even from sleepiness – roulette and poker, blackjack, and baccarat. If you are tired of the lack of live communication due to the next restrictions on the work of land-based gambling establishments, then live dealers will come in handy!

It is better to contact the Winhalla Casino support service in English, with low chances that they will be answered in other languages of the site’s interface – German or Finnish. Oddly enough, even the interface is not presented in the proper Scandinavian languages, native to the Vikings. Operators try to help the public using the chat on the site, but they only do this from 5 am to 9 pm UTC. In a word, this aspect needs to be improved by transferring the support service to an around-the-clock schedule and teaching it foreign languages.

Winhalla Casino so far looks like a very small establishment with no special global ambitions – or ambitions that are not backed up by productive activity. The only clear advantage over most competitors is the Maltese license. The rest of the benefits, including a low wager for wagering bonuses, are accompanied by some, so to speak, nuances that the public may not like. We do not urge to deny attention to this site, but we insist that it should continue to work on the errors.

Trustly
faq
What countries are restricted?