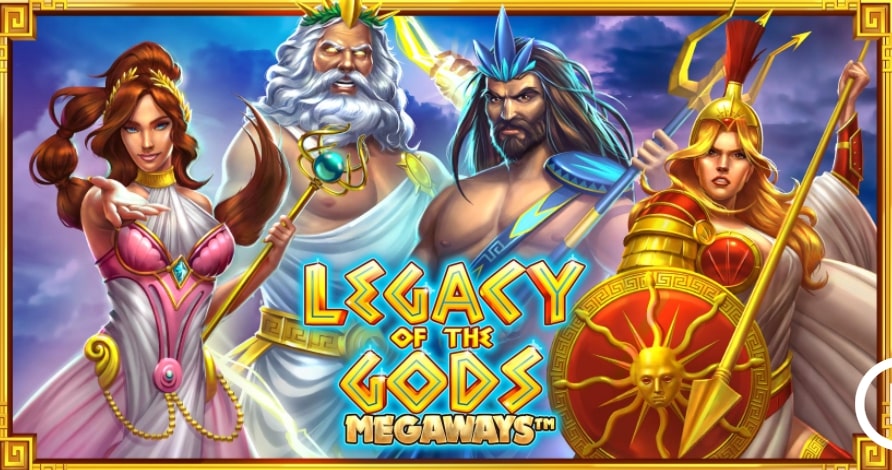 Money is a pretty mundane dream, even if you want a lot of it. After all, anyone can make a decent amount, or even just win it at an online casino. Therefore, a true gambler wants something significantly more significant – he is interested not so much in money as in the atmosphere of his omnipotence and belonging to the caste of the elite. If you are not impressed by the opportunity to be a man, even the most outstanding, it remains to try on the guise of a god, claiming the rights to the inheritance of ancient deities.

The developers from Blueprint Gaming decided to play along with the audience and created a slot that will completely immerse you in the atmosphere of the greatness of antiquity. Developing the super popular Megaways franchise, the company has introduced another slot machine in the series – Legacy of the Gods!

The modern variety of slot machines will not let the player get bored, but if you have already played enough of your favorite toy, then you need to choose something new. It is unlikely that someone will independently test all the games in a row, so you can only rely on the recommendations of other users who advise this or that entertainment. Given the popularity of Legacy of the Gods Megaways, the public wrote an impressive number of comments that allow the uninformed to decide in advance whether he will like this slot machine or not. Of the advantages of this slot, the following are most often distinguished:

However, it would be wrong to say that Legacy of the Gods Megaways is impeccable entertainment that should be recommended to everyone. On the contrary, visitors to online casinos highlight a couple of disadvantages of this entertainment, and such disadvantages could even scare someone away. First of all, high rollers doubt the expediency of the time spent – they have nowhere to roam here because the size of the bet is limited from 10 cents/pence to 10 euros/dollars/pounds. In addition, there are complaints about the ordinariness of the topic – whatever one may say, ancient mythology in one form or another is really in demand among developers, and some clients have become boring.

Ancient Greece and its culture have been inspiring artists and ordinary people for two millennia – so the developers of Blueprint could not stand aside. With a roughly standard Megaways game scheme, the “Olympic” theme is exploited as intensively as possible – the sacred Mount Olympus can be seen in the background, and Zeus, Aphrodite, or Athena can appear as symbols. Although the inscriptions are in Latin letters, the font imitates classic Greek. 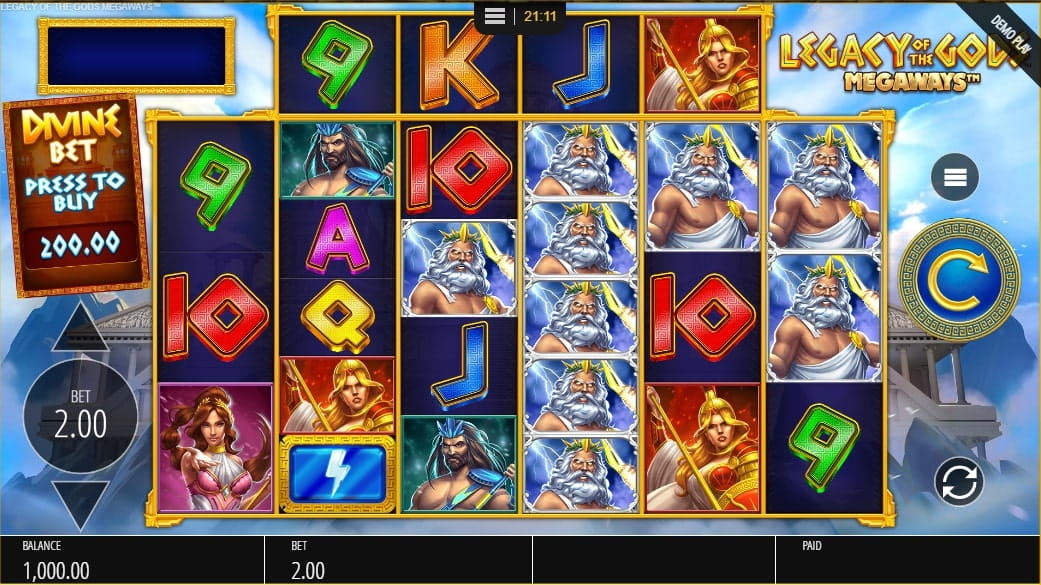 Some gourmets scold this slot for using a well-worn theme, rightly mentioning that even in the Megaways series itself, there is already something similar, known as Gods of Olympus. Nevertheless, the offer is not taken from the ceiling – the ancient Greek mythology is offered to us because it is in demand, and the slot, in the end, looks quite original.

If you are one of those who, keeping in mind the need to perceive slots only as a game with the possibility of losing money, still expect to win, then Legacy of the Gods is a good option. The provider puts an RTP of 96.5% into the slot machine, some sources report even higher rates – just over 97%. This is a lot – online casinos rely on a stream of users to help them earn money, therefore they do not seek to make money on each player.

Another thing is that the volatility of this slot machine is estimated by realists as high, and only optimists believe that it is somewhere between medium and high. In other words, there will be a win, and it will most likely please with its size, but we still have to wait for it. It is extremely unreasonable to make big bets with this slot – on the contrary, it is better to take into account that the vast majority of spins will be lose-lose and save your bankroll. Considering that the profit from one spin can exceed the bet size by 50 thousand times, the visitor can safely make modest contributions – the jackpot will still pay off the costs.

As it befits a Megaways slot, Legacy of the Gods is interesting to a visitor of a virtual gambling establishment from the point of view that there are a lot of potentially winning combinations here. In total, there are almost 118 thousand of them – because six reels are involved in the game at once, and each one can show at once from two to seven symbols. The more special symbols drop out, the closer the player is to success. The most valuable is, of course, the symbols of the gods, and above all – Zeus. Unlike the “minor” gods, only combinations with two Zeus are already considered winning – the rest of the same symbols must fall out at least three. 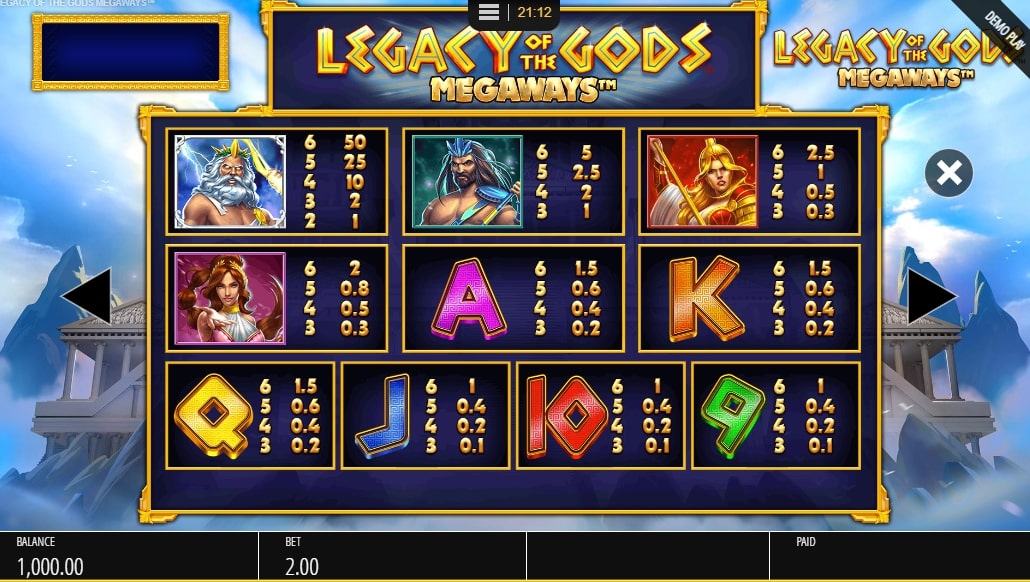 An additional factor of success is cascades – as soon as a winning combination falls out, its components immediately disappear, being replaced by new symbols. In this case, no additional spin occurs, but the appearance of new symbols can lead to the formation of new winning combinations. Thanks to this, the user, having spun the reels once, can expect to win multiple times.

We have already touched on one of the special features of the slot above – we are talking about a cascade, in which a winning combination is replaced by new symbols without wasting an additional spin. However, there is another interesting option, which is the drop of a mysterious symbol that randomly transforms into any other. Whether he is lucky or not is a question, but such uncertainty only fuels the excitement of the player. In some cases, the mysterious symbol turns out to be useful, helping to assemble a combination that simply would not exist without it.

Free spins are another “feature” of the Legacy of the Gods slot because it is interestingly worked out and allows the player to win significantly more. To qualify for free spins, you need to collect at least four Zeus lightning bolts on the playing field. At the same time, the exact number of free spins fluctuates greatly in the context of exactly how the combination fell – it is possible to connect multipliers, thanks to which the winner will only increase. You can potentially win up to 27 free spins, which is already a solid claim to win money!

Judging by numerous comments, fans of Legacy of the Gods like the proven mechanics of Megaways games and users also consider the toy to be elementary beautiful. The excitement of the gameplay is also added by the fact that you can win not only money but also free spins, extending the potential duration of the gameplay. For fans of ancient Greek mythology, the slot machine is also interesting for its authenticity – even if it is not the only one of its kind, it deserves attention, even if you have already played something similar.

There is also criticism of the slot, but it cannot be considered catastrophic. As is the case with most other slot machines, Legacy of the Gods is just one of the fun options. Some will like it, and some will not, but this certainly does not mean that it is bad!

faq
What is the RTP of Legacy of the Gods Megaways?

One of the strongest aspects of the Legacy of the Gods Megaways slot is a fairly high return rate – developers and gambling platforms take only about 3-3.5% of the commission for themselves, returning everything else in the form of winnings. Together, the players will never outplay the administration, but because of the high RTP, the luckiest audience will have a chance. At the same time, you should remember about high volatility: wins happen aptly but rarely, therefore, you need to treat your bankroll more economically, immediately counting on a long game.

What is the biggest win available on Legacy of the Gods Megaways?

For many slots, the winning ceiling is a specific amount or a multiplier concerning the bet made. Most sources, including the official ones, describe the maximum winnings in this slot machine as “your bet multiplied by 50 thousand times.” Considering that you simply won’t be able to bet more than 10 dollars, euros, or pounds here, you definitely won’t be able to count on a millionaire’s win, but even so, the jackpot looks very tempting.

How volatile is Legacy of the Gods Megaways?

Like the rest of the slot machines in the series, this slot is designed with high volatility in mind, which only a few experts tend to consider average. As a rule, they do not win here either on the first spin or the first day, although the second statement strongly depends on the size of the player’s bankroll. The correct tactics for winning here presuppose a good supply of money with a small number of bets because there is a great chance of not making it to the victory. In the meantime, it is extremely important to reach it – as a reward for a long wait, the developer usually pays a decent win.

Is there a free spins bonus in Legacy of the Gods Megaways?

Naturally, where without the bonus in the form of free spins! To qualify for free spins, you need to collect scatters, but a combination of them is considered sufficient only if at least four units are involved in it. The exact number of won free spins varies greatly depending on the characteristics of the combination, adding an element of excitement to an already interesting game.