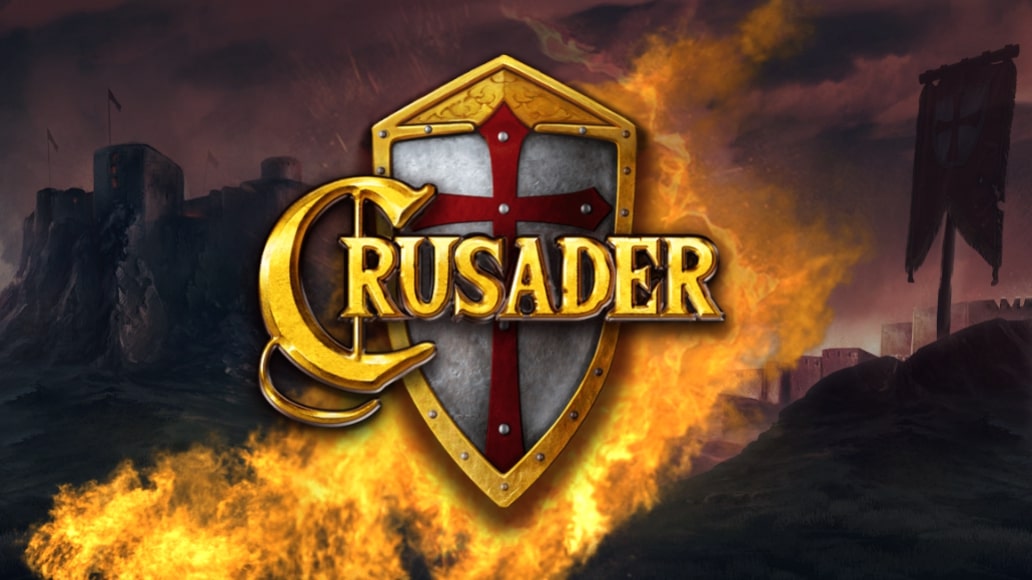 Visit Slot Play demo
Content
Pros
The originality of the theme in itself commands respect
The gameplay is relatively simple, but at the same time, it provides all the necessary functions and capabilities, including free spins, sticky wild symbols
The slot machine can be launched even on mobile devices
The playing field takes up a significant part of the screen, the symbols are made large enough
Cons
The whole slot looks rather primitive
The maximum win multiplies the bet by only 2500 times

In the modern world, one can argue about who the crusaders were because they did not adhere to the norms of Christian morality and gladly plundered lands on the way to the East, hiding behind the greatness of their mission. However, another fact cannot be denied: many ordinary soldiers sincerely believed that they were doing a useful and godly deed. In the armies of the crusaders, a significant percentage of the participants probably did not pursue any material gain – people jumped off the spot and were ready to risk their own lives for the sake of restoring justice, as they saw it in those days. This is what fascinates – an unshakable faith in the ideal, which is so lacking in modern people, imprisoned for immediate practical benefits.

Visitors to online casinos also want to feel their importance on a global scale, so developers sometimes offer to try on the role of a great historical figure. Crusader Slot, developed by ELK studio, invites you to try yourself as an ordinary crusader, to survive serious trials, but without risk to life and health, and, if you’re lucky, experience the boundless satisfaction that justice was restored!

The crusading theme in itself attracts a lot of attention as an original one, but let’s be objective – it has never happened that a video slot has become a leader in popularity due to the theme alone. Dozens of developers lure the player with new creations every day, promising an interesting design and a chance to win big, but in reality, of course, not all slots are worthy of priority attention. If you spend time and money on testing each slot machine, it turns out that there are simply no resources left for getting real pleasure, thanks to the best samples. That is why, before charging the entire bankroll into unfamiliar entertainment, it makes sense to read the comments of other users.

We deliberately went through thematic forums to compose a coherent picture of the disparate opinions of individual players. It turned out that Crusader Slot, like most other gambling entertainment, has its advantages and disadvantages. Which of them will outweigh in your case, we cannot predict, therefore we suggest the reader independently familiarize himself with the basic laws. Let’s start with the positive – why the Crusader Slot is worthy of attention:

However, the Crusader Slot is not perfect. The amazing elaboration of the theme, typical for most of the best ELK creations, somehow failed here – among other symbols, even cards are used. The whole slot looks rather primitive, suggesting that the previous generation of casino visitors played such games. In addition, the maximum win multiplies the bet by only 2500 times – such a multiplier will impress only a person who does not know what the average jackpot is now.

Choosing a topic, the ELK development team decided to turn to history, focusing on a not very hackneyed topic. Ancient Egypt was, the conquest of America was, but the era of the Crusaders was a real find! At least the crusades are still considered one of the largest and most important events in world history, and the flair around them is perfect for the player to imagine himself as a real knight! 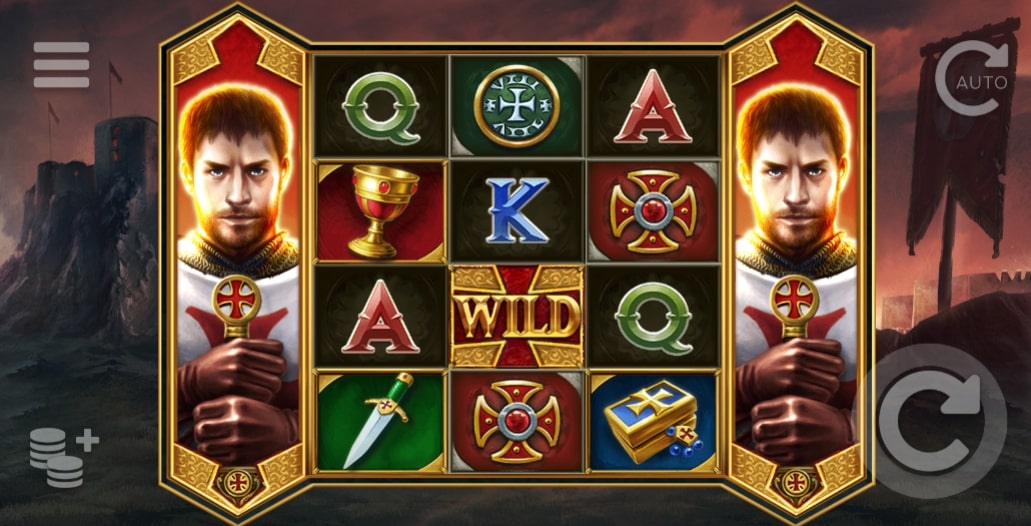 But if originality must be unambiguously praised, then questions arise about implementation. It’s not even that the video slot turned out to be somehow bad against the background of the average level – it’s just that the ELK team itself usually produces something of a higher quality and is taught that there should be no card symbols on the playing field. Crusader Slot has them, so we tend to consider this a clear flaw, given who created the game. Traditionally, for this supplier, everything is fine with the soundtrack, but this fact only emphasizes once again: these guys can try more noticeably.

The proprietary mantra of online casino administrations says: gambling is just entertainment, a player should not expect that he will be able to make money. We cannot disagree with this wording, but at the same time, we understand: there are hardly any visitors who are interested in spinning the drums just like that, on sheer enthusiasm. The modern gaming industry offers many much more interesting interactive entertainment than video slots, and the latter is kept only on the thrill of the opportunity to WIN.

Therefore, the percentage of return is fundamentally important for the player – even if it is almost unrealistic to get a profit, but you would like to at least stretch the available bankroll for the longest possible period. From this point of view, Crusader Slot is far from the worst choice, given the RTP of 96.1%. However, keep in mind that high volatility severely cuts the chances of ultimate success for those who expect to gain profit quickly. Remember: big wins that equalize the balance at the level of about the notorious 96.1% do not happen often and almost certainly will not fall out in the first few spins.

Nothing fundamentally new was invented when creating the Crusader Slot – as in most competing slots, the condition for getting a win is to collect combinations. We do not call them lines because the rules allow you to take the winnings even with a strange figure that is part of a symmetrical zigzag. Exactly how a prize combination of five symbols may look is shown in the screenshot below, but we will add that even a segment of any of the shown options, consisting of at least three identical symbols in a row, means a victory.

When determining the winning amount, take into account the number of symbols involved in the combination and the value of each unit. Wild symbols are traditionally useful – when adjacent to any combination, they make it longer, since they tend to replace any other symbols.

The peculiarity of Crusader Slot is that there are like two wild symbols here. “Ordinary” is a large WILD inscription and cannot boast of anything other than the classic functions of a wild symbol. The situation is different with the wild crusader in the form of a portrait of a medieval knight, which can only appear in the extreme reels. If the wild crusader is only partially visible, the number of repeated spins is automatically triggered for the symbol to become fully visible, occupying four rows.

Continuing the above, we note that the wild crusader has another important function – it is directly responsible for distributing free spins packages. It is, however, not easy to knock them out – to receive such a reward, it is necessary to make sure that the entire wild crusaders can be seen in both extreme reels at the same time.

The bonus game is implemented using the Expansion Symbol, which looks like a red arrow on yellow background pointing up. If such a symbol falls out, another one, a bonus one, is added to the standard four rows, increasing the chance that at least somewhere on the playing field the combination will be collected. The maximum number of rows can be up to a dozen – three times more than it was originally.

Crusader Slot should be commended for its non-standard approach to the choice of theme and a rather good soundtrack, but, amicably, it has no other obvious advantages. We are not saying that this is a bad slot machine, just by all other criteria, it looks ordinary and unremarkable. In a situation where any modern video slot has dozens of competitors with similar game mechanics and a similar theme, this sounds like a death sentence, even if the entertainment is done sensibly in general.

faq
What is the RTP of Crusader Slot?

On average, about 96.1% of the amount is returned from the bankroll spent on bets in the Crusader Slot. The exact figure depends on the luck of a particular player – situations are possible and a complete loss of all the money, and a significant profit. However, it is necessary to mention the high volatility: the indicator we provided is relevant for long-range play. Anyone who expects to win back quickly is doomed to failure – his bets, most likely, will not bring significant benefits.

What is the biggest win available on Crusader Slot?

Snatching the maximum jackpot in video slots is an unprecedented success, but still, most players pay attention to its size because a person tends to dream and hope. For some reason, the creators of Crusader Slot have taken away such an opportunity – the ceiling for multiplying the bet is set at 2500x. On the one hand, this is a lot, and not every player can make such a profit, on the other hand, many are confused that it is impossible to pretend for more, even theoretically.

How volatile is Crusader Slot?

Crusader Slot is considered a high-risk slot – that is, you should not be surprised if a significant number of bets in a row simply burn out or bring some insignificant income. The relatively high RTP of such entertainment is provided only by persistence over a long distance since a solid win happens with great frequency. However, the recommendation regarding the economic use of the bankroll in the case of this game will not be superfluous.

Is there a free spins bonus in Crusader Slot?

Free spins in the Crusader Slot are provided, but to be honest, it is quite difficult to earn them. At the start of the game, in the outer reels, you could see the figure of a wild crusader – the symbol occupied all the rows. To get a package of free spins, you must exactly repeat this position of the symbols – they must be visible in their entirety.