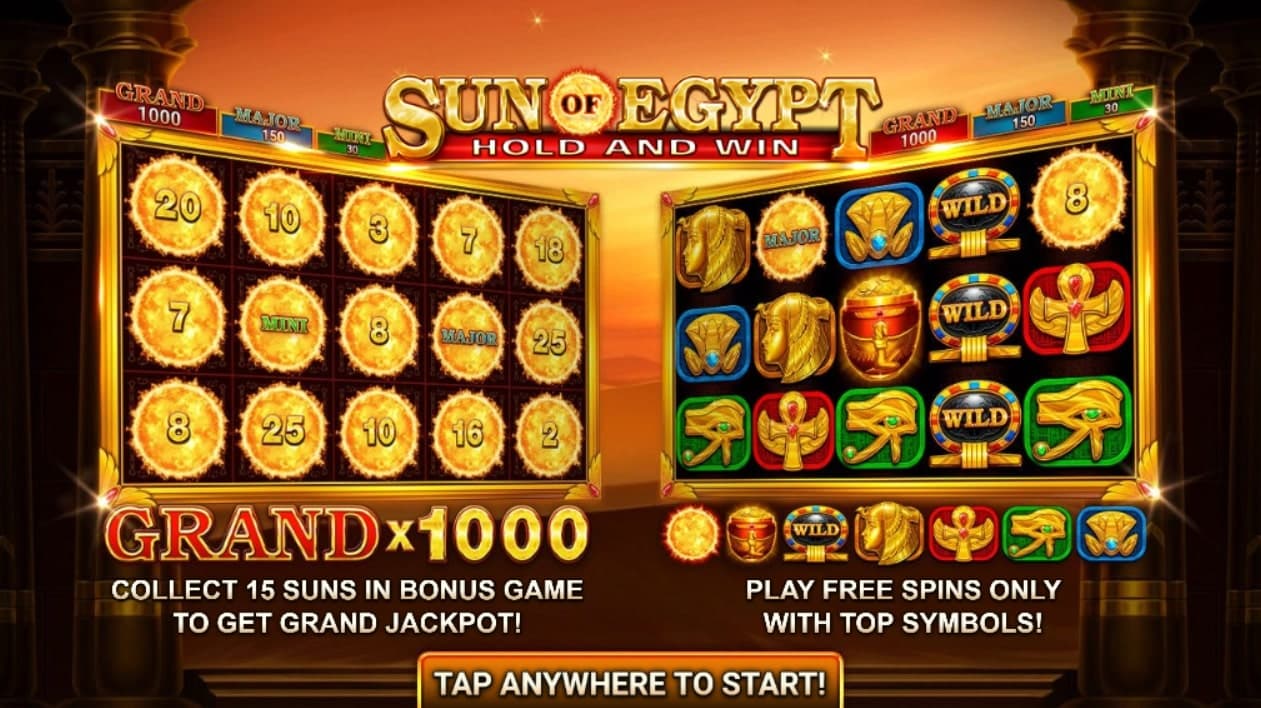 Visit Slot Play demo
Content
Pros
Developers have developed three different jackpots at once
You can not only get a free spins package as a gift, but can also expect only “expensive” symbols
The slot machine is well adaptive for PC and mobile devices
The soundtrack deserves special respect
Cons
The ancient Egyptian theme
Part of the public does not like the lack of multipliers 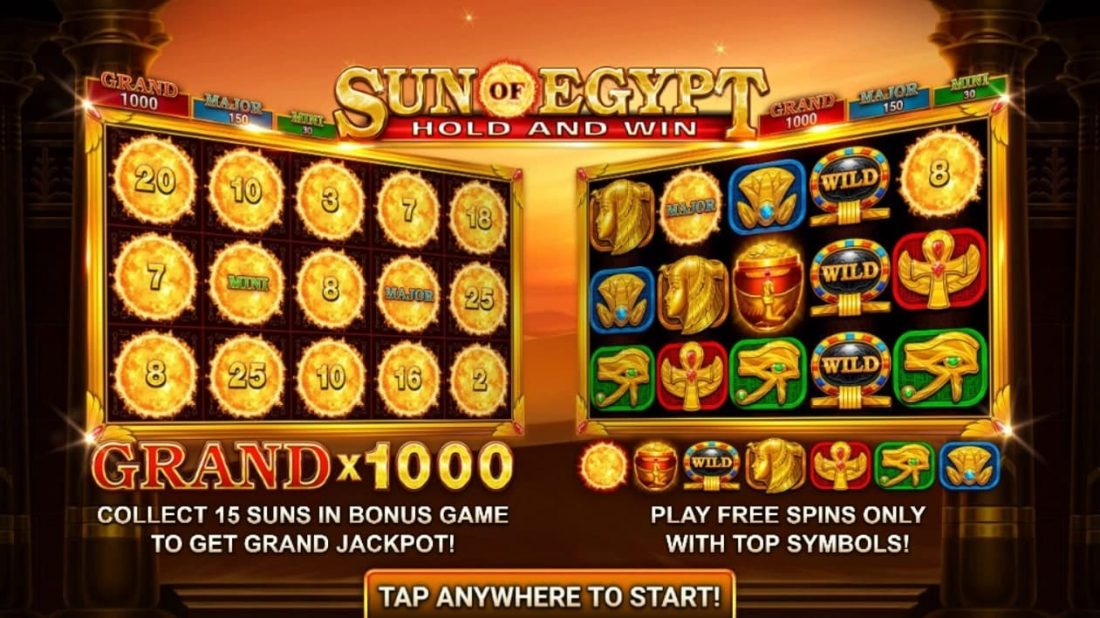 Some of our readers will probably argue with the following statement, but the theme of Ancient Egypt for online slots has long become a classic. By the decree of distribution, it has almost equalled the “fruit” classics. Some think that the monotony of an infinite number of slots dedicated to the same civilization only kills interest, others are already so accustomed to the existing state of affairs that they would not want to change anything. Regardless of which of the categories of players you belong to, today we present you another slot of this type for your judgment – the Sun of Egypt Slot!

Even a sincere fan of the ancient Egyptian theme in gaming software will agree that sometimes it is necessary to change a familiar slot machine for something new. A fan of Anubis and the company is also unlikely to argue that replaying all themed slots is unrealistic, and there is no point in this – the pharaoh in itself does not make the development either interesting or profitable. Therefore, it is better not to waste money and time trying to choose the next best ancient Egyptian slot among thousands of others, but trust the comments of users who have already checked everything for you!

This is all the more reasonable approach since you don’t even have to visit any forums. This is useless – we have already visited them and collected the most typical reviews. As a result, we got a complete picture, according to which Sun of Egypt Slot is praised for many advantages:

The criticism of this slot is as well-grounded as it is typical – most other slot machines are criticized for about the same subjective flaws. For example, the ancient Egyptian theme, according to critics, is overly hackneyed, and ordinary game cards as symbols are a sign of the developers’ bad imagination. In addition, part of the public does not like the lack of multipliers that would help break even bigger winnings.

As you might have guessed from just the name of this slot machine, the main theme that its developers decided to exploit is Ancient Egypt and its attributes. In fairness, something went wrong with the fantasy – in particular, completely non-thematic gold jewelry is used as a symbol. But the very Sun, which appears in the name of the slot, is drawn in a very natural way. Not sure what the daylight has to do with it? The fact is that the ancients worshiped him, believing that this is the supreme deity – it is not surprising that it appears as a bonus symbol! 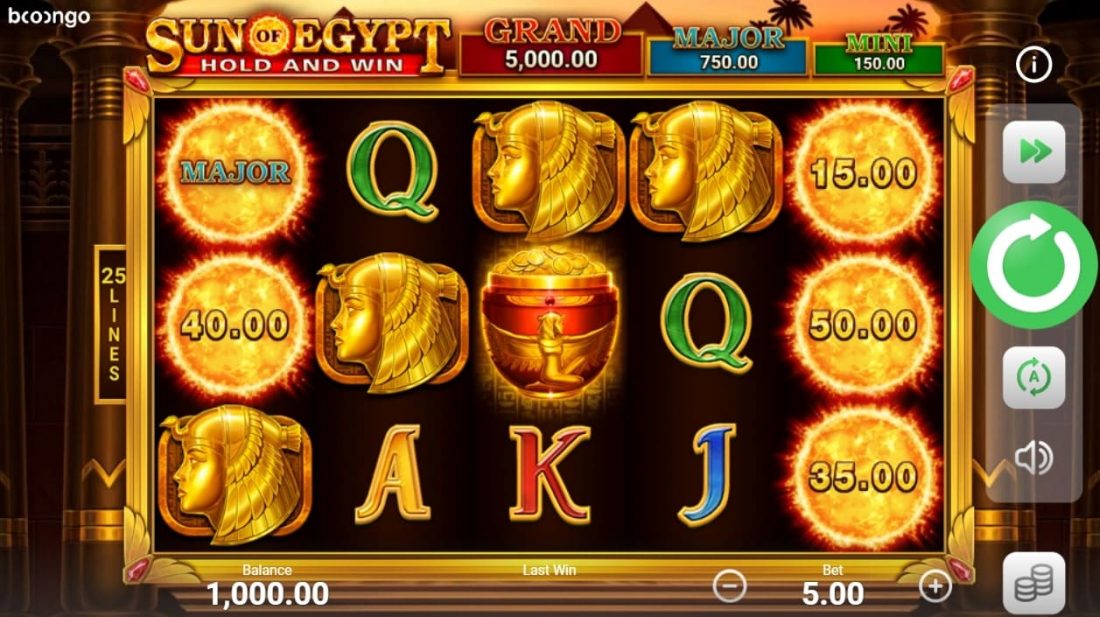 We would also like to mention the soundtrack. On the one hand, it can be criticized because the developers, instead of the old Egyptian melodies (of which we have an extremely vague idea today), used the motives of the modern Arab population of the country. On the other hand, the music is memorable and mesmerizing, and this rarely happens with soundtracks for slot machines in online casinos.

It is unlikely that there is at least one player in the world who is pleased with the process of spinning the reels. We are sure that if you inform such a user that his actions do not promise even a theoretical possibility of winning, he will immediately refuse to continue the game. That is why gambling readers should pay attention to the return rate for each slot.

In the case of Sun of Egypt Slot, this figure is approximately 95.3%. This means that developers and casinos take a total of about 4.7% of the commission, which, however, is unevenly distributed among the players. This means that some lucky ones can turn out to be a plus and get away with a win, while losers can face a fairly quick loss of their bankroll without any return.

A notable feature of Sun of Egypt Slot is that there are a huge number of different combinations that can be regarded as winning. The minimum requirement is to collect at least three of the same symbols, however, four or five, of course, will bring a more solid win. As for the combination of five identical components, there is no mandatory requirement regarding their positioning in a line – on the contrary, the administration is ready to pay the price for everything that has signs of symmetry. 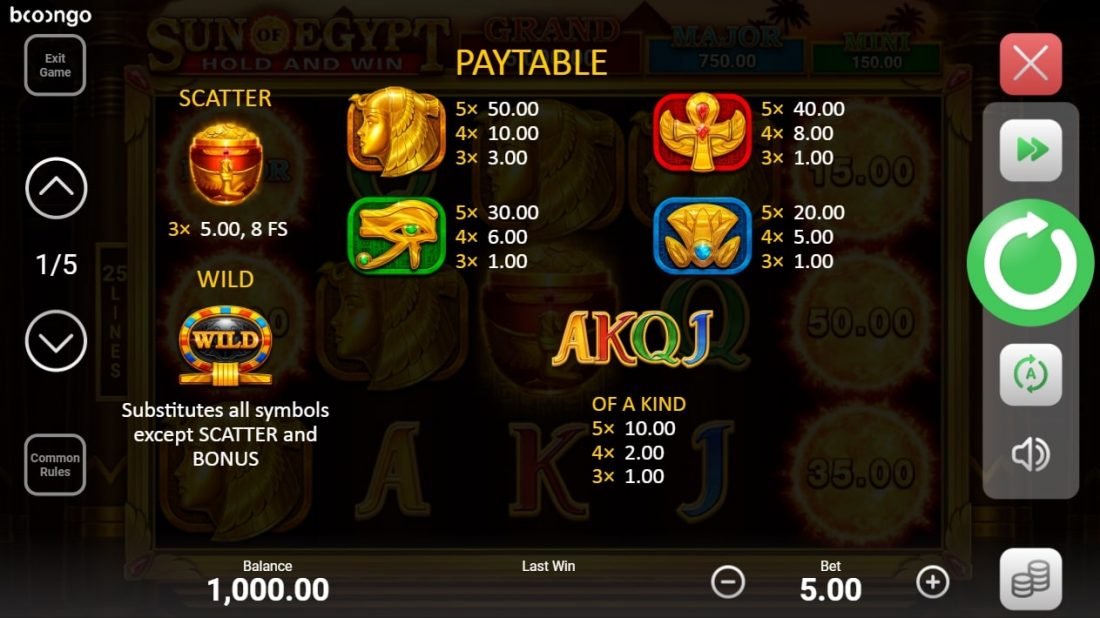 By analogy with most modern slots, there are scatters here that allow you to earn packages of free spins, and wild symbols that replace any others, if this would help to collect a combination. The advantage of the game lies in the fact that during the bonus spins only the most profitable symbols appear – ordinary card symbols will not spoil the game.

Flaming suns represent a separate unit – they start the bonus game. It is in the bonus game that the user claims the main prize of the entire draw – one of three jackpots, among which the most valuable is, of course, the grand.

The main “feature” of the game is the presence of a bonus game. To participate in it, you need to collect at least six shining suns on one screen. Their location does not matter – the main thing is that the required amount is typed simultaneously over the entire surface of the screen.

After that, a special bonus game is launched in the amount of three free spins, during which only suns with different numbers on top of them can fall. In principle, there may be nothing in place of potential symbols, but the player is naturally interested in collecting a full screen of solar symbols because this most likely promises a huge win.

The main bonus that can be awarded to the player during the game with this slot is free spins. To qualify for a win, you need to get three scatters in the form of barrels of gold. In the current version of the game, we see a condition according to which these casks should be anywhere on the three middle reels, however, older sources indicate the need for casks in the first, third and fifth rows. We conclude that the administration can sometimes change the conditions of the drawing.

Having achieved a winning combination, the user will receive eight free spins as a gift. This principle also works during the spin of the free spins themselves – that is, the total number of free spins may increase.

On the one hand, it is somehow wrong to expect something fundamentally new from a slot that actively exploits the ancient Egyptian theme in a five-by-three format. On the other hand, it would be wrong to say that this is a completely banal development – whatever one may say, the administration has thought of introducing three jackpot options and a bonus game, which indicates a demonstration of some kind of fantasy. In general, the slot leaves a rather pleasant impression, and if Ancient Egypt is still not boring for you, you should try your luck with this slot machine, if only because the music and graphics are commendable here.

faq
What is the RTP of Sun of Egypt Slot?

The average return rate at Sun of Egypt Slot is estimated to be around 95.3%. This figure would be more correct to call the average – it is 1-2% behind the recognized leaders of generosity, and at the same time significantly ahead of the most “greedy” developments. Here, theoretically, you can beat the office, although we warn you right away: this will not be easy.

What is the biggest win available on the Sun of Egypt Slot?

The maximum payout in Sun of Egypt Slot is relatively small – it is tied to the size of the player’s bet and does not allow increasing it by more than a thousand times. There is only one way to achieve such a solid bonus – for this you need to hit the grand jackpot in the bonus game. Please note: participation in the bonus game itself is not the same as winning the jackpot, so the reward may be significantly smaller. In addition, the slot machine offers three types of jackpots at once, so the size of the final payout will vary greatly depending on the degree of your luck.

How volatile is Sun of Egypt Slot?

The variance of Sun of Egypt Slot stays plus or minus on average. Here you will not have to languish for months in anticipation of that happy day when the player will finally be overtaken by a win, however, do not expect to celebrate your victory after each spin either. The average frequency of wins means their average size – the payments will not be scanty, but the player will not become a millionaire either under any circumstances.

Is there a free spins bonus in the Sun of Egypt Slot?

One of the advantages of Sun of Egypt Slot is that the developers did not forget to add the free spins option to the gameplay. It is quite simple to get a package of eight rolls – you need to simultaneously display three barrels of gold at the same time on the game screen while fitting in the three middle rows. There is no need to collect a special combination – it is enough that there are three of them in the designated area. Using the won free spins, you can win another game along the way – the conditions are the same.