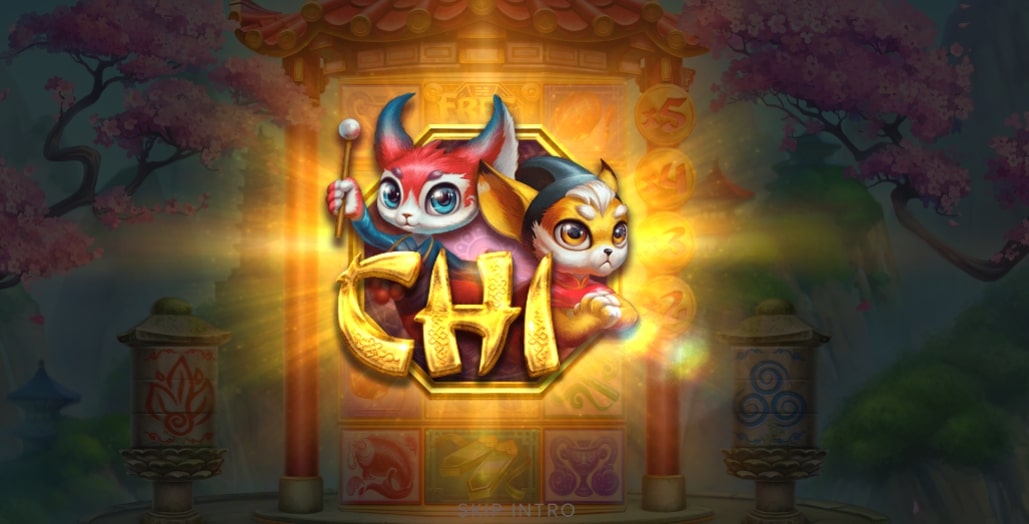 Visit Slot Play demo
Content
Pros
Completely non-trivial graphics
Complex gameplay
A solid final win
Cons
A small playing field with three rows, albeit with five reels
Some players are not used to the fact that the reels do not rotate from top to bottom but in a horizontal plane
The slot machine has only 27 pay lines, which is normal for a field of this size but scares off clientele accustomed to more solid numbers

In life, we can be ordinary and unremarkable ordinary workers, but that’s what games are needed to send us to a completely different world, forcing us to be imbued with a foreign culture. If earlier people had to take a vacation and buy expensive tours to get to know a foreign culture, today it is possible to imbue with overseas traditions even while playing at an online casino. While most developers limit themselves to platitudes like Ancient Egypt, or all the boring “eternal classics” in the form of fruits and three sevens, the ELK team decided to go from a non-trivial side, having issued another slot in the spirit of Eastern traditions.

To be fair, the guys mixed everything possible in one slot machine. The plot with the spirits of fire and wind is more typical of Chinese mythology, but sakura, the eternal symbol of Japan, was chosen as a background. For a player from Europe or North America, the differences between Chinese and Japanese culture are not striking, but the Orientals are probably perplexed. However, for those for whom the main goal in the game, and not the study of culture, this should be enough.

Slot machines in modern online casinos are numerous and varied – there are enough of them that the average visitor allowed himself a thoughtful choice. Not wanting to offend anyone, we note that there are more or less successful developments, and a typical client is unlikely to be happy to spend time and bankroll on a disappointing game. In order not to experience the advantages and disadvantages of each slot machine on our skin, we suggest using someone else’s experience – for this, there are thematic forums.

The client usually has no time to look for comments on different sites – he wants to immediately see in front of him a holistic picture of what constitutes an unfamiliar slot. Fortunately, our readers have us – having carefully studied the topic, we are ready to present a report on the main pros and cons of Chi Slot. We suggest starting with the good – the qualities that make Chi Slot in consumer demand:

An objective assessment requires mentioning not only advantages but also disadvantages. One of them is a small playing field with three rows, albeit with five reels. Some players are not used to the fact that the reels do not rotate from top to bottom but in a horizontal plane. Finally, the slot machine has only 27 pay lines, which is normal for a field of this size but scares off clientele accustomed to more solid numbers.

Opinions about the theme and graphics of Chi Slot can likely be opposed, depending on how well the player is familiar with the culture of the East. The Japanese and Chinese will surely say that the design is primitive, the features of the two cultures are mixed, and slot machines may not at all match the ideas of the locals about the universe and spirits. But for the western man in the street, this is, of course, a breath of fresh air – all these cherry blossoms and sky lanterns make you forget about the gray everyday life and plunge into the magical atmosphere of adventure and excitement. 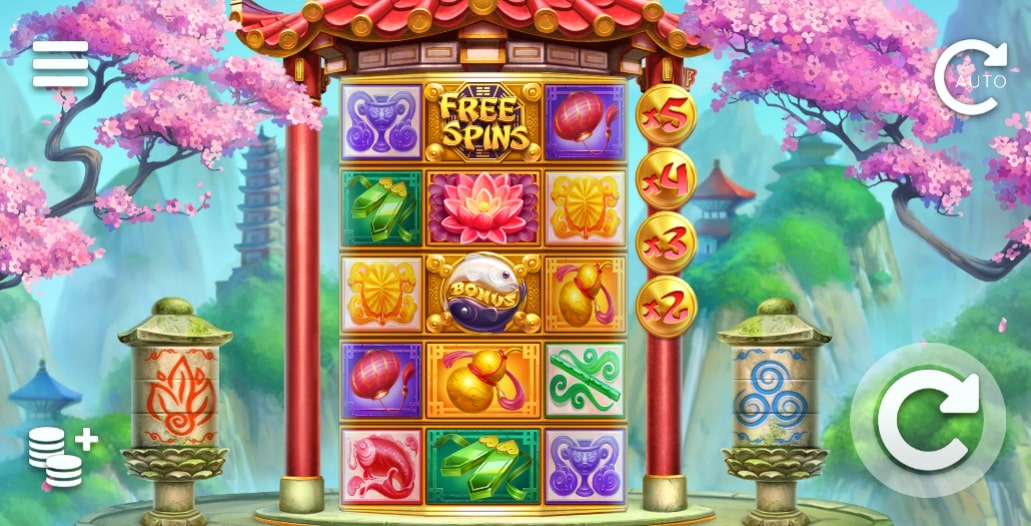 According to an established tradition, the ELK developers care not only about the visual component but also about the musical accompaniment. It’s not just about the sounds accompanying the spin or other actions of the player, but about the soundtrack – the music constantly playing in the background. She certainly participates in creating the proper atmosphere, adding flavour to the traditional oriental landscapes.

Although casinos like to persistently warn that gambling is not an income, just a way to have a good time, no player would not dream of winning, and more. Even if you approach the issue soberly and with a realistic view of things, it still turns out that a high percentage of return is a purely positive characteristic. Even if you never succeed, why not just play on the bankroll longer, using occasional winnings for new bets?

RTP Chi Slot is estimated at approximately 96%. It is impossible to blame the developers for greed – even if they did not break the record for the minimum commission in favour of the supplier and the administration of the gambling establishment, but they certainly did not fall below the average penalty level adopted in the industry. It should be remembered that Chi Slot belongs to high-risk slot machines – that is, solid payouts are relatively rare here, so the user is interested in saving his bankroll if he hopes to convert it into winnings.

While creating Chi Slot, the ELK team made only one fundamental innovation, dictated by the peculiarities of Eastern culture. The fact is that the reels here rotate in a horizontal plane – that is, the symbols do not fall from the top but the side. Accordingly, the rows are vertical, and the drums are horizontal. This is the only fundamental difference from analogs with five reels and three rows!

Composing a combination requires placing three or more identical symbols side by side. The screenshot below shows which combinations are considered to be winning. If the combination involves less than five symbols, it does not matter where it starts from and what edge it touches – as long as the figure is visible. 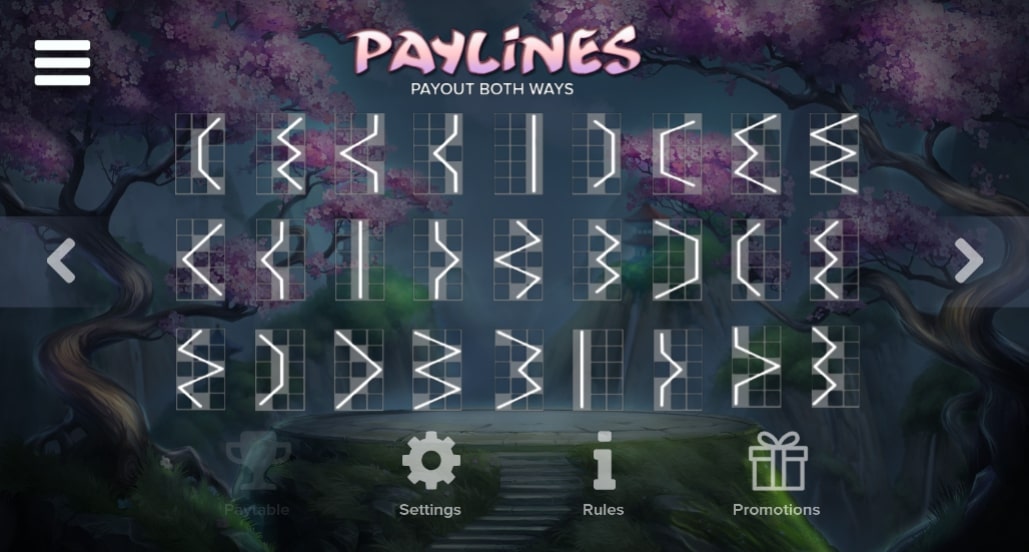 Each symbol has its value – accordingly, the size of the win depends on how many symbols are involved in the line and which ones. The wild symbol traditionally “knows how” to turn into any other if this contributes to the collection of a full (or simply larger) payline.

Accessibility functions are performed by the fire spirit Chi (after which the slot machine is named) and the wind spirit Mow. The appearance of the first means that a certain number of wild symbols will appear on the playing field – from one to six, it is not known in advance. If Chi appears during the free spins wagering process, then the wilds provided by him also become sticky.

Wind Spirit Mow provides multipliers – thanks to it, the total winnings can double, triple, quadruple, or even fivefold.

With free spins, everything is simple – they are and are issued upon the appearance of symbols, literally and signed, on the playing field – like free spins. To receive a reward, bonus symbols must be simultaneously present in an amount of at least three, however, they do not require a combination to be collected from them – let them be in any part of the screen and do not touch, as long as they are.

The bonus game is called Stairway to Fortune and is also triggered by three bonus symbols in any sequence, but the symbol itself looks different – with the Bonus inscription over the yin-yang sign, for some reason composed of two fish: black and white. The essence of the bonus game is to earn an additional multiplier for your winnings. 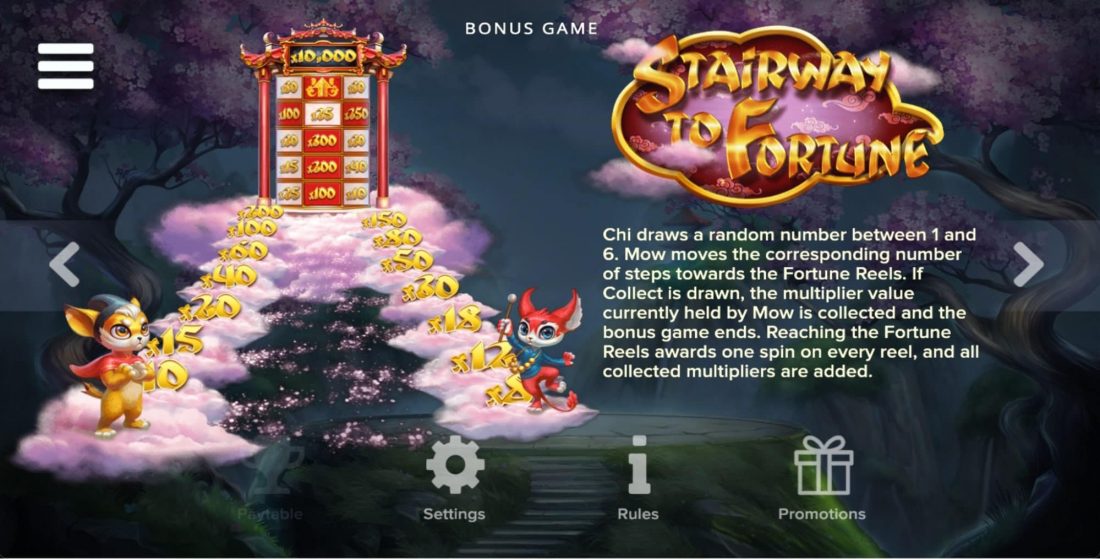 The strongest point of Chi Slot is that the developers took care of the original design and chose a theme that was not overused by competitors. Nowadays, this is very much appreciated by users, as well as a high maximum jackpot, coupled with additional features and a high payout percentage, which we will also call the advantages of this slot machine. However, in terms of implementation, you can find fault with the slot if the main thing for the player is not just to play, and he was expecting a purely Chinese or Japanese aestheticism. However, if this is the only drawback, then the development deserves the title of sensible and promising.

faq
What is the RTP of Chi Slot?

The payout percentage is one of the most important indicators of the quality of a slot machine – with all due respect, no one will gamble, knowing for sure that they will lose all the money without the slightest chance of wagering. Chi Slot has a solid 96% RTP – even if this is not a record, the developers have nothing to blush for. Another thing is that only a persistent player who has managed to make a lot of bets and has endured high volatility can get a win. In other words, a refund is a refund, but saving a bankroll is useful.

What is the biggest win available on Chi Slot?

Most of the competitors offer a much more modest multiplier of the maximum jackpot, but the Chi Slot developers decided not to stand on ceremony and set the jackpot as 12500x to the bet. Millions do not play here, but solid success in the game promises the fulfillment of some old dream.

How volatile is Chi Slot?

The Chi Slot variance is high, which means that it is recommended to think over the strategy of the game far in advance. They do not indulge in too frequent winnings, and even if a particular player is lucky, most payments will be relatively modest. To reach the stated RTP of 96% or even exceed it, reaching a profit, you need to play for a long time and persistently. Therefore, the winning strategy is either to initially charge a lot of money into the game or to economically spend a small bankroll.

Is there a free spins bonus in Chi Slot?

Without free spins, any slot machine immediately loses a significant amount of charm and appeal. The ELK developers did not dare to risk it; that is why Chi Slot contains free spins packages. To get them, you need to collect three bonus symbols on the playing field at the same time, decorated with a yin-yang sign in the form of two fish.